Sitting on the far end of the row of chairs in Sunday School — trying to avoid Bob at all costs — our teacher told the parable of the good Samaritan. 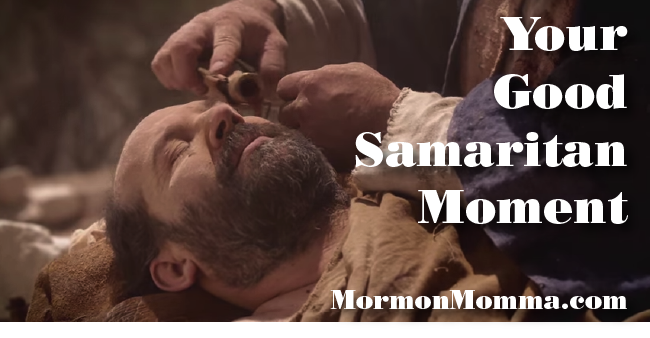 You know, I just realized that I've been really unkind to Alison for the past seven years just because she's fat. Plus red hair. Oh, and the glasses and the freckles. Plus she's a freak. But that's probably wrong and maybe I need to ignore all those flaws and just let her be.

Instead, we all offered the typical, nondescript, impersonal — and yet most worthy of authoritative praise — answers. You know, like “when a new girl moves to our school” and “when we see the boy whose family is so poor he dresses funny.”

I wanted to jump up and down and scream, “Me, me, me, me!” But, of course, I tried to melt into the background instead.

A dear friend was overwhelmed with critical medical issues in her family. During a conversation, she mentioned in passing how she missed being able to take her kids out to get burgers and fries. Her days were filled with doctor visits, treatment, recovery, and trying to stay afloat with all the other demands of life.

A few days later, I drove to her boys' favorite burger place and bought two enormous bags filled with various burgers and fries. With a heart literally bursting with love — because I actually took the time to act on my good intentions — I drove to her home and rang the bell.

She answered the door and invited me in…where I learned a different friend had taken the entire family to the beach for the day.

I left her with $58 worth of cold fries, for no reason at all.

A neighbor once told me she loved fresh farm corn more than anything in the world. In one of the rare moments when I actually pay attention to such small talk, I made a note that the first time I saw fresh ears of corn being sold at a roadside produce stand, I would grab a couple dozen and drop them off at her home.

When the day arrived, I excitedly drove to her home and knocked on the door. She invited me in to the family room to chat…where I immediately saw three dozen newly shucked ears of corn piled like a pyramid on her kitchen counter.

After talking for a few minutes, I picked up my unopened sack and skulked away.

How often do we walk right past those in need but don't bother to notice — or at least don't bother to act? Even though I've pleaded with God for others to help me, I do it all the time. I have my reasons.

I have a long and sordid history of failing miserably in my attempts to serve. Not only did the effort result in no real help to the other party, but also with me feeling like an idiot. I have been known to literally beg people to tell me what they need so that I don't try to wing it on my own in utter failure.

Sometimes that is my excuse for not acting. But it probably won't be sufficient when I'm asked to account for my actions. What to do? Maybe I need to learn to serve starting with very small and immediate things.

When can I be the good Samaritan? When I see:

Here's the thing. When you hear a Primary lesson or watch a church video, everything is crystal clear. The perpetrator looks sinister — nothing like me! — and the victim is sympathetic — nothing like the bratty, disrespectful kid in the theater or the inconsiderate neighbor who doesn't care about anyone but himself.

In real life, however, it's never that easy. The victim has flaws and the perpetrator has justifications. And sometimes it's hard to tell which is which because there's a lot of back and forth going on.

I'm satisfied (intellectually, if not in practice) that my life's mission is not to make everything completely fair. My mission is to notice— again and again and again — when I'm not hanging onto that big fat slippery iron rod and to figure out which way to go to get back on the straight and narrow path.

That path is almost always strewn with the battered bodies of other people who are hurting just as much as I am and hoping for some love, accommodation, and mercy.