Videos of Jesus Christ – Ye Have Done It Unto My Daughter

The Sheep and the Goats

There is a scene in the musical GodSpell that depicts the Jesus figure teaching his followers about the sheep and the goats (Matthew 25:31–46). It's both a poignant and humorous scene, often shown with those listening (like Judas) trying to sneak from the goat side to the sheep side unnoticed. 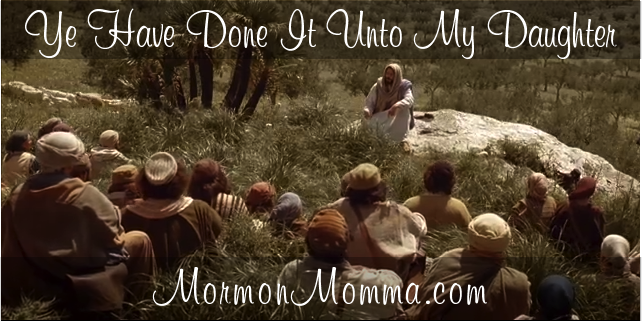 Unfortunately for me, getting to the “sheep side” where all will “inherit the kingdom prepared for you from the foundation of the world” is going to take more than just lying low or hoping Christ looks the other way for a minute or two while I tiptoe over. Instead it will require some big things:

On the other hand, being “prepared for the devil and his angels” is a piece of cake. Just sit back on the couch and watch another episode of NCIS, Big Bang Theory, Downton Abbey (cough), or Sherlock (cough, cough, hack).

I know the command. So do you. We've heard it all our lives. Even most non-Christians know the deal

Yes, I get it. Honest. But Christ isn't here and sometimes he seems so far away that conjuring up in my brain how I would treat him — or how I should treat him, vicariously — doesn't much help motivate me to act in the way I should. But there is something that does get through my thick skull.

When I'm in a medical situation — labor, injury, etc. — I become this other person. I'm passive and compliant. I thank the nurse who takes my blood pressure. I do whatever I'm told. But everywhere else I try to be responsible and competent — and expect the same from other adults.

Don't get me wrong, if I go to a place of business, I'm always considerate and civil. (I've worked all sorts of “lowly” service jobs and know what it's like to be treated like dirt. I'd never do that to someone else.) But I do expect people to do the jobs I'm paying them to do and do them well. And I'll speak up (civilly and factually) when they don't.

But last year the idea of “walking in someone else's shoes” finally clicked. You see, one of my college daughters got a summer job at Walmart.

Now I know some people scream about how Walmart is evil incarnate. But I'm actually a Walmart fan. My daughter was thrilled to have a steady job to earn her tuition and it was close to home. But this daughter also struggles with anxiety. She's very bright and competent, but spending hours and hours every day in a customer service position, where she has to meet with people, assist them, and resolve their problems was a big move outside her comfort zone.

Training went well, but the first time she was left on her own — with machines, hundreds of codes, and all new information — two elderly women in a hurry came through her checkout line. When things didn't progress as smoothly as they could have (one item wasn't in the system and a couple of others rang up at the wrong price) these women got livid and belittling.

The impact on my daughter lasted the rest of her (long) shift and surfaced at many other times throughout the summer when customers started getting annoyed or impatient. Hearing her pain when she got home broke my heart and I wanted to go out and punch some old ladies for the hurt they had caused.

Just a few days later, I was checking out at the same store when my daughter was not on shift. I waited in line for 20 minutes and then everything that could go wrong, did — some because of general store problems, but most due to cashier error. Of course, I had an appointment that was quickly approaching.

Normally I wouldn't yell or call a manager or even make a general put down. But I would clearly let my inconvenience be known, by scrunching up my face, sighing, checking my watch repeatedly. That kind of thing.

I could feel my impatience rising.

Then I thought of my daughter. Just a flash of her face when she came home from work that day, discouraged and beat up and sad. Then I looked at this stranger who was behind the cash register. I did not see Jesus Christ…because I have a hard time seeing him. But I did see my sweet daughter and I actually remembered that somewhere this cashier had a mom who sees her the same way.

Suddenly my heart totally softened to her. She wasn't a klutzy woman annoying me and making me late. She was my daughter, stressed out, doing her best in a thankless job, and trying to get things to work.

I asked when she got off and if she's had a long shift. I told her my daughter works there, too, and I know it can be a hard job. Honestly, I didn't do much except to smile and be more patient. I didn't feed her or clothe her or do anything significant. But my heart felt so different when I saw my daughter in her.

Someday I hope to be able to feel close enough to Christ that I can long to treat others well for his sake. Until then, I'll think about those I love so dearly when I interact with others and hope that the others pass the goodwill to by children when they cross paths.