Videos of Jesus Christ – One Day at a Time

Usually I hate sermons like this. Particularly when they come from general authorities. 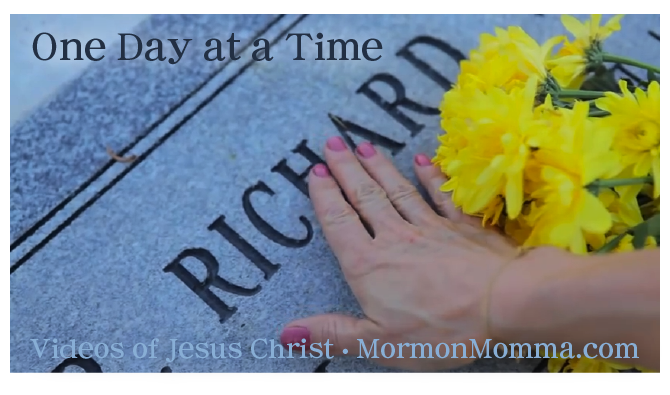 Years ago I read a book by Elder Gene Cook titled Receiving Answers to Our Prayers. I loved the book and poured over it again and again, sure its pages unlocked the magical key to answers from God. I mean, if Elder Cook and his family can find every lost dog, wallet, and hat, if they can have all last-minute financial needs met — just by praying good and hard — then we all can! I was full of hope.

But it didn't work out that way for me.

Of course, I considered the fact that my righteousness isn't on par with Elder Cook, Elder Cook's wife, Elder Cook's teenager children, or any blood relation to Elder Cook or any other general authority or general auxiliary leader. Also any local leader or congregant. So I couldn't expect the same results. As they say, your mileage may vary. Exponentially.

So when I began to watch this outreach video by Elder D. Todd Christofferson, I thought it would be more of the same. And, at first, it was.

I remember having to go before the Lord with no where else to turn and in tears and pleading, just seek for anything that he would provide in his love and wisdom.

What I learned in that process was what it's like to come to a point in your life where you really have no where to turn but to God. In those circumstances, one truly learns how to pray and how to receive the answers that come.

Sometimes it was nothing more than a feeling that things would work out somehow. No indication of how or when, but it would be alright.

Sometimes it was an idea that would make a difference.

I really wanted to scream. What about, “Sometimes it was nothing”? Period. End of story. What about the regular folk who aren't “special witnesses of Jesus Christ” but just very normal, very regular people who don't live days sprinkled with divine intervention?

Unless “things would work out somehow” means, “yea, your life might be ruined and devastated, but someday, eventually, in the eternities all will be made right” — which is kind of a Mormon gimme — then, sometimes, often, even the most sincere, gut-wrenching, total submission prayer doesn't yield anything positive, warm, happy, or hopeful. Sometimes the only positive is eternal.

You only have to be vaguely, remotely familiar with history to see that. (And if you think all those millions of people who suffered were just bad people who didn't pray hard enough, well, get a grip.)

When I was a Beehive, we memorized a poem by Carol Lynn Pearson.

This radio set
Called prayer
Is designed
For remarkably
Simple repair.
When the lines fail,
There is no doubt
Which half
Of the set
Is out.

I thought it was true. I thought God was always there, like a trusty gadget, to respond to our  every beck and call. Certainly not always yielding to our demands, but at least giving a firm, loving, “No, not now, but that's because I've got awesome sauce for you just around the corner, so hang on.”

I thought that because God was a perpetual motion machine (or something), the only outage could be on my end. Perhaps my batteries were dead or my antennae was busted. Again, sure, I'd say it's just me. I have a divine communication problem.

But then I looked up and noticed that there are decent, wonderful, charitable, even Godly people all over the world — all throughout history — who have suffered mercilessly and died treacherously. My trite formula didn't work so well for them either.

Maybe I'm a cynic. I think I'm a realist. After all these years I've come to the conclusion that God does not always answer our prayers. Sometimes the “answer” is no answer — and I think it's a huge semantic stretch to call that an “answer.” Sometimes the answer is to struggle without an answer and even without hope. Sometimes the answer is to make our best educated guesses about important things and hope they turn out all right — and if they don't, to struggle with what they turn out to be.

While I was busy hating on this video for being the same old “things might get really bad, but if you just turn to God they won't be” message, I found a gem that I hope is as meaningful to you as it was to me.

I think what we have to do when the pressures are there and the clouds are dark and threatening, is take life one day at a time

It helps at times not to think too far ahead and just do what the day requires; “Give us this day our daily bread.” We're not anticipating the hardship or suffering that might be entailed, we sometimes just have to break it down to this moment, this day, and while deliverance isn't immediate and you may not see the end, still you've got enough for today.

When this began happening in my life my prayer was “Give me a miracle,” you know, “Solve this problem,” and it took a while to finally come to the point of saying, “I'm content to get a daily help, and let it take what time it takes,”  knowing that I can rely upon God.

Rely on him to do what? To get through another day, perhaps, without giving up on ourselves, on humanity, on God. If that's all we do in some of those dark days, that is a success. And it was God by our side.

Note: Thanks for your patience while I've been AWOL dealing with my sweet dad's death. It has been much harder than I expected — given his extreme willingness and readiness to go. But I have felt peace at this time and am ready to get back in the saddle.