The world is full of idols, athletes, entertainers, people famous for no reason at all, and people famous for all the wrong reasons. It's easy for our kids to get lost in the glamour and glitz and to idolize people whose examples are not worthy of being emulated.

Some attempts have been made to encourage Mormon kiddos to look up to scripture heroes as their models by creating plastic figurines for Samuel the Lamanite, Nephi, etc. It's a noble cause, but you might notice that almost every such figure (due to…you know…the dearth of women in the scriptures) is male. Even all the missionaries are male. Phhhttt. (I did find a Sariah figure, but that's all I can see to represent the female half of the population.)

What can we do?

First, we can do is to acknowledge that no person is perfect. No person other than Christ should be our exemplar. Downplaying the hero worship of popular culture icons can be done by discussing how everyone has some talents, but that doesn't mean we copy everything they do. We might want to learn to do a layup like Johnny Moe, but we don't have to dress, talk, and philander like he does.

Second, we can look for those who do good in many ways and show their examples. Using examples of people who have made a positive difference, blessed others, shown Christlike love and then discussing how we can emulate them can be a great motivator. These good people come in all shapes, sizes, colors, and ages and that diversity can help our children look for good wherever they find it, not just on the court, stage, or magazine cover.

Watch these video clips or read these news stories. (You may want to preview them first, to be sure they are suitable for your children.)

This 15-year-old Tennessee football player died when he covered three girls from gunfire.

Greater love hath no man than this, that a man lay down his life for his friends.

This woman left a glamorous job in the fashion industry, sold her home in Paris, went to Nepal, and built an orphanage.

You can learn more about Pelous from this article or on her I'm a Mormon profile.

The youngest ever Nobel Prize laureate advocates for human rights, particularly for the education and rights of women. She has spoken out fearlessly against the Taliban and other oppression. She was targeted for assassination at 15, but survived being shot in the head. I love that she is clear that “God saved me” when others are hesitant to declare her survival from a shooting miraculous.

This man organized the rescue of 669 Czechoslovakian children—mostly Jews—to Britain. This 1988 BBC show surprises him with an honor.

Stop after each video and ask questions such as these:

If you desire to make a difference in the world, you must be different from the world.

God does notice us, and He watches over us. But it is usually through another person that He meets our needs.

The Mormon Channel has a nice printable for that fits this lesson. 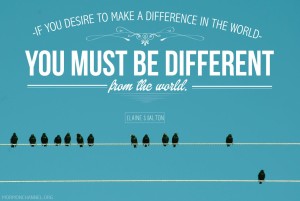 How would you teach your children to choose heroes? Please share your ideas in the comments below.