Today in testimony meeting our bishop opened the meeting by describing the baptism of his youngest daughter yesterday. He said, in part:

It was an honor and a privilege to baptize my daughter yesterday…I'm still floating on cloud 9. 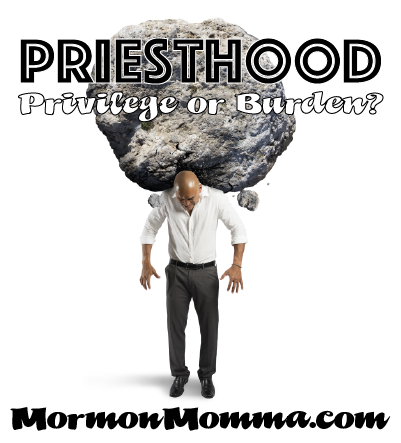 As I sat there listening, I reflected on some of the comments about gender equality in the church this past week. In that conversation, Ryan posed some interesting questions. I'll try to answer them here.

To begin the discussion, let's see how the church defines the priesthood so we have an authoritative footing. On LDS.org we read:

The priesthood is the eternal power and authority of God. Through the priesthood God created and governs the heavens and the earth. Through this power He redeems and exalts His children, bringing to pass “the immortality and eternal life of man.” God gives priesthood authority to worthy male members of the Church so they can act in His name for the salvation of His children. Priesthood holders can be authorized to preach the gospel, administer the ordinances of salvation, and govern the kingdom of God on the earth.

What is the Big Deal About the Priesthood?

What is it exactly about the priesthood that you sisters desire?

Hearing the bishop's statement above, I wanted to ask, “So, is it ‘an honor and a privilege' or not?” Priesthood, schmiesthood. It's just more work! Or does it bring both privilege and responsibility—as all privileges do?

You simply can't play both ends of this and maintain credibility. Either the priesthood is priceless, brings power and blessings or it doesn't. You can't tell the young men one thing (to get them excited and motivated) and the young women another (to get them to accept the status quo).

Is it the responsibility of presiding over meetings or directing the work in the church or giving priesthood blessings or [insert desire]?

Asking about gender disparity always seems to draw such questions. “Why do you want to be a bishop anyway?” “What is it that you want to do so badly?” “What silly little administrative nonsense are you ‘agitating' so much about?”

May I first ask you to answer the same question? Why did you allow someone to ordain you? Why did you want the priesthood? Why do we recognize and congratulate men on ordinations?

When you ask what it is that women want, I don't really understand the question. I'd suggest that it's not markedly different from what men want. But I'll humor you with an of example.

About 14 years ago—when my husband was on a plane to Germany—my daughter, Alana, who was three-years-old, was attacked by a pit bull on the church lawn as we were making our way to the car. As I sat on a bench in the church, holding my blood-soaked, terrified daughter and waiting for the ambulance to arrive, someone had to call the missionaries—who didn't know my daughter at all—to come give her a blessing.

It would have been really nice had I and my close friend Rolain (who was standing by me) been able to bless my daughter.

The way I see it, women don’t need the priesthood because you’re born with it. We call ours Priesthood and yours is called Divine Nature. In my opinion, the latter is even more powerful than the former.

Divine nature isn't a different priesthood. Divine nature simply means that you've “inherited divine qualities.” And, of course, that's not something unique to women. Which is “more powerful” isn't germane to a discussion about gender distinctions, since men have both divine nature and the priesthood and women only have the former.

Why would you be envious of “you sisters” because of a specific character trait your wife possesses? That's like me saying, “I find myself envious of you brothers at times when I witness the height of Manute Bol.”

To address the stereotype, the single most common statement I get from other moms about homeschooling is, “I'd love to homeschool, but I don't have the patience.” Not all of us have patience. (My homeschooling aside, I don't either.)

But certainly men have the capacity to develop patience…just as women do.

…with seemingly no temptation to act otherwise.

A number of years ago I learned a valuable lesson from a friend. She had been married as a virgin and her sister got pregnant out of wedlock. Amidst the discussion she disabused everyone in the room of the idea that people who don't break the law of chastity do so pretty much because they just aren't really sexually interested or inclined.

The fact that someone chooses to behave appropriately shouldn't be seen as an indicator of lack of temptation. And lacking self-mastery shouldn't be interpreted as having more temptation than those who have it.

The man holds the Priesthood, performs the priestly duties of the Church, but his wife enjoys with him every other privilege derived from the possession of the Priesthood.

That's kind of the point. From now on, women get all the desserts (along with cleaning the dessert dishes). But don't worry. Men get “every other privilege” derived from possession of treats (except actually eating them).

While it's not central to this post, it's worth noting that the temple ordinances and promises are somewhat different for men and women. The endowment and sealing are both different. And while I've never witnessed a male washing and annointing, there are at least a few words that have to be different.

Without knowing any of you, I wonder if you are confusing the lack of “equality” for which you are longing as something doctrinal and cultural, or if for some reason only you and your spouse would know, something in your home and in your lives is such that you are not an equal partner who shares the priesthood responsibilities as the Lord has commanded.

This statement compels a response. The implication that women who “agitate” probably have some kind of creepy, overbearing, male chauvinist husband who doesn't follow “priesthood sharing” counsel (what is that, anyway?) is offensive.

First, let's note, it was a man who started Agitating Faithfully. (Yea, he's probably a henpecked, woosy face being dominated by his burly wife. But he still started it!) Second, my own husband is the best man I've ever known. He has never treated me like a second-class citizen. He has never pulled the “I preside” card. He has always asked my opinion and treated me like an equal. He doesn't just “seek [my] council and advice” about issues, we decide together.

I do not have “dividing feelings like inequality” in my marriage. I have them in the church.

The Future of Gender in the Church

The church has very clear gender distinctions. They bother some, they don't bother others. As our culture becomes generally less sexist, such distinctions will seem less and less in line with the culture. We all know being different from a (sometimes) corrupt culture isn't necessarily bad, but it will demand explanation the more out-of-step it seems to be. (Witness the Prop 8 situation.)

This expectation for a logical explanation isn't just coming from some crazy, disgruntled women in the church. Nor, as Ryan implied, from women who have brutish husbands. It also comes from non-members, investigators, media, friends.

I have been asked literally dozens of times how I can belong to a church that doesn't think women are as good as men. While I think that's a misunderstanding of the situation, the idea behind it shouldn't be ignored. Women don't have remotely the same voice in the church as they do in other walks of life and as women progress culturally, this gap will seem wider and wider.

There isn't a clear scriptural or doctrinal source for the gender distinction in the church. As far as I can tell, it's a cultural artifact, a tradition. There may be more to it, but that case is certainly not clear.

As we attempt to make sense of the issue, let's not belittle those who ask or attribute to them apostate motives. Neither should we use fallacious reasoning or just blatantly make stuff up to try to answer questions that—as of yet—don't have really solid authoritative answers.

I submit that holding the priesthood of God is both an honor and a responsibility. Like having children—which has been both the most difficult and the most rewarding thing I've done in my life—having the power to “act in His name for the salvation of His children” is probably worth the extra effort.