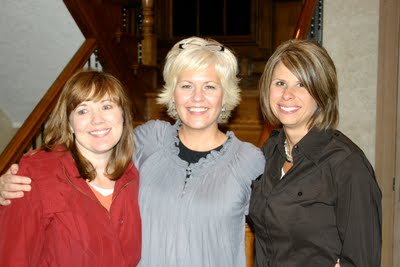 When I was in third grade, a girl moved into my ward with her parents and her two sisters. We became instant friends. Temporarily they lived with her grandma, then moved a block away to their new home.

Annette Barton and I went to school together and to church together. We grew up together. I dare say I had more sleepovers at her house than anywhere else. (Probably because I don't think her sweet mom ever, ever turned down a sleepover request.) We watched the entire series of Roots on TV while I helped her take care of her Great Grandma Young. We all made her sing “Feelin' Groovy” over and over because in elementary school pitch was not her strong suit. And in high school we all campaigned for her student council bid. (She won. We must have done our job.) We spent countless hours sending in song requests to KEYY Radio for our latest love interests. When her 8th grade crush was accidentally shot by a friend and nearly died, we spent all night calling the hospital (over and over and over) to check on his condition. (“Critical” which in hindsight is kind of obvious for a guy who was paralyzed by the accident.) And, again, we called KEYY to request Baby Come Back at least a dozen times. We nearly share a birthday (May 18 and 19), so we got kidnapped and taken to breakfast before school by our friends together every year. A few times I got to help her babysit the two brothers that came along later. Every Christmas Kim picked up Marnae who picked up me and we all headed to Annette's house and then did the rounds to see what everyone got from Santa.

She later became Annette Mortensen when she found her dream man. She is gorgeous, amazingly artistic, and faithful. She in all sincerity and without any add-ons or sympathy votes or exaggeration-for-the-sake-of-a-good-post is one of the kindest, most decent people I know.

The summer before Sam finished his PhD and when Annette's husband was still in school she hauled her little girl, Becky, and her pregnant body to the park with me and my two little girls (Jessica and Belinda). While there I got to impart my amazing and vast knowledge of all the changes she would undergo when her little boy was born and she had two whole kids to care for.

She's spent most of her married life in far-off states with her husband and three amazing kids. Now she lives in Missouri. But when you're part of a high school gang (from back in the day before “gangs” were something to avoid) like mine, you have a permanent bundle of the dearest friends.

Over a week ago, I got a heart-wrenching message. Annette's darling middle child, her only son, McKay (who was serving in the military) had died.

Last night, as most of our band of friends gathered at the mortuary (three of that group are in the picture above: Paula, Annette, and Lisa), it was a time of great sadness and great joy. Some of us have lost parents. Some have lost siblings. But until now, none of us have lost a child. It was overwhelmingly sad to see our dear friend standing next to the still body of her amazing boy. It should not have been. But it was.

Amidst that sadness was a mom, a dad, and two sweet sisters (one to be married in just a few weeks) who were comforting all of us. A family in the worst of circumstances who still exuded such love and such faith that it left us all feeling better than when we came.

Life is so precious. And for just a minute before I got back to my crazy life I remembered that.