In October of 2013, a Pew survey made the claim that “big majority of Mormons (including women) oppose women in priesthood.” In March or 2014, I wrote Do Mormon Women Oppose Priesthood Ordination? Clarity About the Pew Survey to refute the erroneous conclusion. 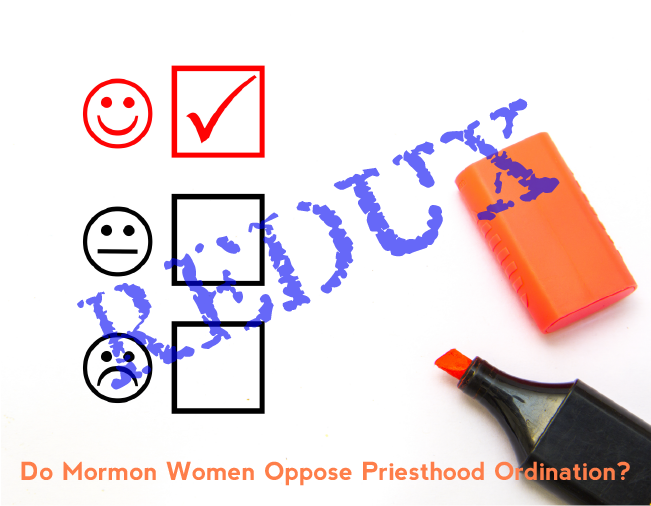 In the aftermath there were numerous groups—claiming faithful adherence to doctrine—that used the survey fallaciously to “prove” that women opposed ordination in some sweeping way. It was purported to show that the status quo is not only inspired, but preferable, to members at large and women in particular.

Another large poll released yesterday shows—surprise! surprise!—an almost diametrically opposed result. And that I was right.

The Pew poll failed to understand and accommodate the high priority faithful, active members put on deference to authority. In the context of the way the questions were asked, the “faithful” response was obvious. But once the questions changed to incorporate that cultural imperative, the answers turns on their head.

It is interesting (and eye-rolling) how this poll was reported in local newspapers:

Kathryn Skaggs (as noted in the Deseret News article) wants to have her cake and eat it, too. She wants to use imperfect questions that support her position and disregard imperfect ones that don't.

Sorry, it it what it is. Mormons prioritize deference to authority, so they neither decline nor support female ordination over that authority. They will, however, go along with either one if the leadership so dictates.

So, no, Mormons (and Mormon women in particular) may hope for the priesthood or hope to keep things the same, but they will generally submit to the current leadership position, whatever it is.

In closing, may I remind you all of a few thing:

Here's a vote for better understanding!