In the middle of cranking out an excruciating long post, I keep coming across the almost universally intellectually dishonest or radically uninformed presentations about the supposed 90% of LDS women — and 95% of highly committed LDS members — who oppose ordination of women to the priesthood. So let's clear up what the Pew survey revealed about Mormon opinion on female ordination once and for all. 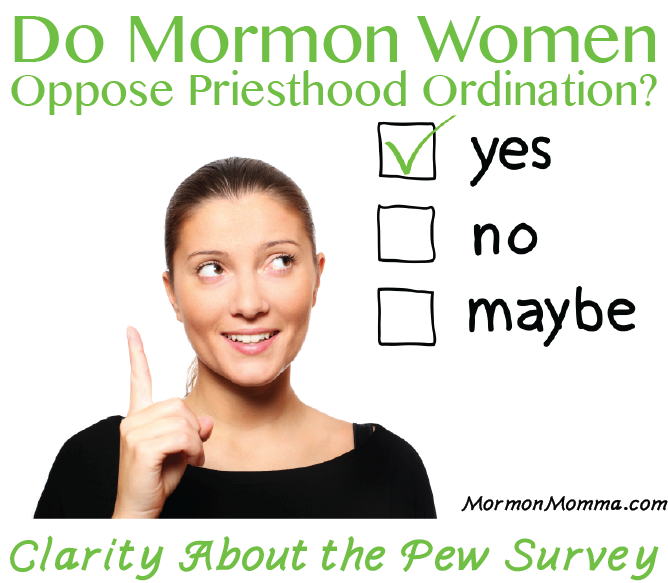 What the Pew Survey Did Not Say

What the Pew Survey Did Say

“Should women who are dedicated members of the LDS Church be ordained to the priesthood?”

All members of the LDS church are taught to “follow the prophet.” We are taught that he is the singular most important and authoritative mouthpiece for God on earth and, in fact, that no one else may declare doctrine. And as of this writing, the position of that prophet is that only men can be ordained to the priesthood.

Again, I liken this to Jeffrey Holland, who spoke of how he prayed and hoped for blacks to get the priesthood from the time he was young. All this happened while the general authoritative positions said:

In other words, Elder Holland hoped and prayed that the current stance was wrong. But it's highly likely that if he were asked, “Should blacks who are dedicated members of the LDS Church be ordained to the priesthood?” he would say “no.” Doing otherwise would be usurping church authorities with his own desires. And he just doesn't seem like the kind of guy to host a hostile takeover.

To be clear, if I were part of the Pew Survey question — in spite of my strong feminist equality positions — I would also be among the 95% who claim to be “highly committed” members answering no to this survey — because  the structure of the church I believe in disallows me from declaring policy/doctrine for the church.

If you choose to use the results of the Pew survey to make a point, at least use them honestly and in the context of the actual question and church culture in which they were asked.