When Decent Mormon Men Don’t Get It 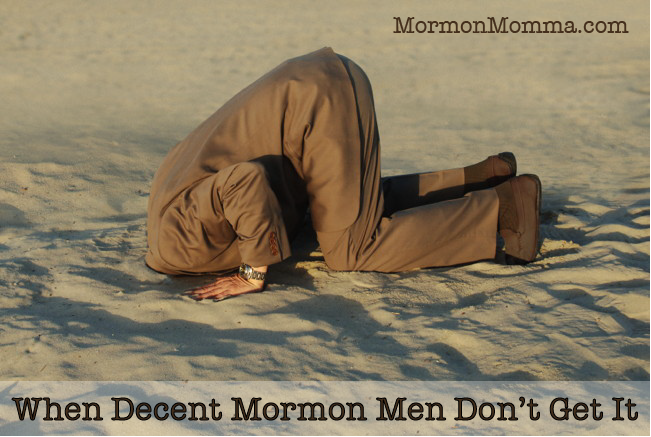 Rather,  I'm a heterosexual woman, married for 28 years (and counting) to a wonderful man, with six kids. I'm also an active LDS women with a calling and a current temple recommend who has a testimony of the restored gospel. And I'm only a feminist (however you define that) in that I think a lot of LDS church policy is based in culture — rather than doctrine — and I think it's helpful (and essential!) to distinguish between the two.

Now that we have that out of the way…

Larry Eastland Is Not Evil Incarnate

When I wrote A Mormon Mother of Daughters Talks to a YSA Bishop About Intimacy, I imagined a place I could point others when I heard, once again, problematic representations of the modesty/chastity/intimacy/pornography/objectification issues that rear their ugly heads so often. Kind of an explain-it-once-and-for-all-and-be-done-with-it kind of thing so I could stop repeating myself. I've been surprised at the positive response, but also at the tangential (and often fallacious) discussions that have come as a result.

In spite of what some comments would lead you to believe, I never condemned Larry Eastland to hell. (As if I could.) Given that I don't know the man (and he didn't respond to my email to him), I have made no judgment as to his character or his eternal salvation. (As if I could.) In fact, I did not say he was evil, bad, horrible, or otherwise downright awful. Rather, I disagreed with his presentation and wrote my reasons. That is enough to really irk some people.

By the same token, I assume most of those who didn't like my post (except, you know, the anonymous idiot troll types) are decent people trying to do their best to sort through difficult issues.

Still, sometimes I think a sexist mindset is so deeply ingrained in all of human experience — and also in the church — that we can't ever get out of it. For example, Jeremy — who appears to be another decent guy — seems blind to the way his perception actually impacts both men and women.

Some of his comments deserve more consideration. Unless otherwise noted, the quotes are from Jeremy.

Does that mean women don’t need to respect themselves and be modest?

First, straw man. I have not suggested that women should disrespect themselves and I don't recall seeing any comments that did so either.

Second, I've often wondered about this and think it's got to, somehow, become part of the modesty narrative if we can figure out how to make sense of it. But I can't.

Why does being modest show self-respect? When does it apply?

When I'm alone, I'm not always modest, and it doesn't seem to make me feel a lack of regard for myself. (Except, of course, that I'm not as pretty naked as I used to be, so getting out of the shower isn't nearly as fun as when I was 20. But I don't think that's what you meant.)

So is modesty about self-respect or about respect for God?

Immodesty As an Excuse for Disrespect

This is a fallacious argument as far as I can see. Again, you assert that immodesty is disrespectful of self — although I'm not sure why — but again, you are blaming the women for the behavior of men. And that, my friend, just has to stop.

Men do not treat women like objects because they dress immodestly. These men do it because they believe a woman who “disrespects herself” (in this odd parlance of immodesty = self-disrespect) doesn't deserve to be respected by others.

However you define this supposed self-disrespect, why do you think “some of us men if not all” think it's acceptable to disrespect a woman who disrespects herself? Where does this “kick her when she's down” mentality come from? Wouldn't the Christlike response be to show her respect? to help her feel worthwhile? to help her respect herself?

So, what do we do about decent LDS men who don't seem to understand gender issues? We explain our thoughts and hope they care enough to listen. They don't have to agree, but they should withhold judgement long enough to engage in the process.

As Lisa Loo so aptly stated:

I would hope it would inspire some concern about your Sisters in the faith, how they experience these kinds of talks about female modesty and sexuality, and especially be concerned about the men who would use this line of logic to excuse their own responsibility for acting virtuously in the presence their female friends, regardless of how attractive they find them.