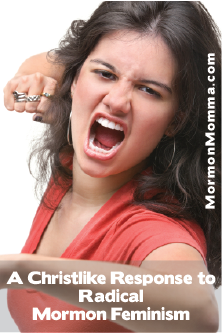 Last night, waiting backstage  for our second show of the day to begin, a discussion ensued. (Not at my encouragement, I'd like to note.) A cast member who's husband is the bishop of her ward said:

As Primary president, two-thirds of our entire budget went to Cub Scouts. That left a third for all of the quarterly activities, Activity Days, sharing time, etc.

While this wasn't news to me — I've been harping on it since I was about 9 and the percentages seem fairly consistent — it was interesting to see not only this very traditional Mormon woman speak out so candidly (in front of her kids), but to see the universal agreement about the problematic disparity in the women's dressing room.

Isn't it time to just wake up and fix this? It's so obvious and so, well, dumb. Why do we keep hanging on to this stuff and trying to justify it? What is so difficult about a little consideration and parity? Do we really “have to wait for every Silver Beaver to die off” before we can make sense of this?

My feelings on such issues notwithstanding — and my belief that common sense is often sacrificed to the dual gods of “how things have ‘always' been” and “how they are today is inspired and so God wants it that way” — I'm really not a radical feminist. I don't want women to become men, I don't want to dispense with men, and I certainly don't hate men. (If I'm sexist, it's probably in favor of men.)

Being in the middle of a political or cultural issue isn't the way to make friends. You end up with both sides seeing you as an enemy of the state.

So, here I sit with gender issues in the church. Traditionalists thinking I'm a traitor to truth and righteousness and radical feminists thinking I'm a wimp. All I can do is speak up when I think the situation dictates and to deal with the reality of a church that isn't run by the all-powerful Me and that might actually —usually — have it right.

While I know — and have sometimes been part of — the stridence that often accompanies Mormon feminism (because, let's face it, actually being heard as a woman in a patriarchal culture can be the more than half the battle), the absolutely hateful, vitriolic responses from the self-proclaimed “faithful” has left a ringing in my ears that is painful. This, generally accompanied by a patronizing “if you really had a  testimony” addendum, is so contrary to the claimed celestial hierarchy that it's startling.

Today I saw a link posted by a friend of mine of Facebook. It speaks to my heart. I hope it speaks to yours. It is well worth a few minutes of your time.

I Am My Sister's Keeper by Kylee Shields.