Book Review: Mormons Say and Do the Darndest Things

As a child I poured over my parents copy of The Devil's Dictionary. The older I got, the more of its humor I understood. I felt so smart with each new enlightenment. 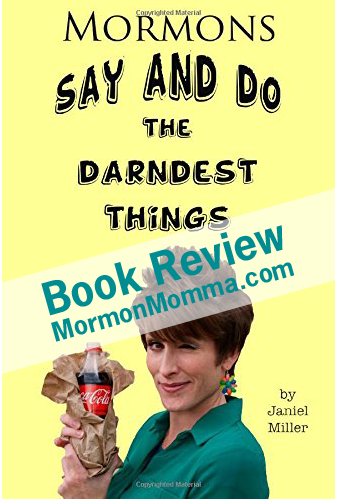 Now, thanks to one-time (well, really eight-time) Mormon Momma author Janiel Miller, we have an LDS version for your amusement. Introducing the one, the only Mormons Say and Do the Darndest Things.

Janiel is a gifted humorist in the very best Erma Bombeckian styling. She's clever, witty, and endlessly (did you read that Janiel?) self-abasing. The last serves her writing, but doesn't match the person. She has every reason to be arrogant, but instead she's lovely inside and out.

I was delayed in my efforts to review the book because my sons (ages 11 and 14) kept sneaking off with it. They would show up at lunch or dinner with a bit to share. Usually it was something like “Fear Not the Apocalypse, for I Have Beans” (because beans in any context is unquestioningly hilarious) or the definition of apple beer (because beer in any context in unquestioningly hilarious, as in, “Hey, mom, can I have some beer. … I mean root beer? Hahahahahahaha bwahahahahaha”).

The book consists of four main parts, which are:

Here I will share a few of my favorites among my dozens of bookmarked pages.

This is the original birthplace and home of humanity. No wait, that's Kobol, from Glen A. Larson's original Battlestar Gallactica series. No, no it's Kolob. No, actually, Kobol. Wait…Never mind. All we know is they sing about it in the Book of Mormon musical.

[Before I go on, I just need to note once and for all that they hymn does not say that God lives on Kolob. Rather, it says, “If you could hie to Kolob…and then continue onward…do you think that you could ever find out…where Gods began to be.” It is “the star nearest the throne of God” not the star where God lives, apparently on fire. OK, back to our story…]

We put a lot of thought into naming our kids, us Morms. We want to live up to that whole “peculiar” thing. Who wants to be like the other guy and name their kids Amy, Taylor, or Ashley, when you can name them Aeyimee, TaiLorre, or Ashleighghehghg? It's no small feat I tell you, naming our kids. In fact, there is an actual Mormon Naming Algorithm involve in the thing. And here it is:

Whatever You Want to Name Your Kid + a 90-degree turn + an X or a Y or maybe a few double vowels + part of your dad's name, or a movie star's name, or your favorite car + something you feel impressed to add, and voilà! (or Vwahlaough!) You have you your very own Mormon name!

So, applying this special algorithm, names like Justine, Whitney, LeeAnn, Sam, and Tyrone become Justicia Blyss, Whitlexus, LieghDawwnja, Saxxsen, and TytronnSher. Throw a few Book of Mormon  names in there—because we love us our BOM names—and you get things like AmMunn, Amyoolec, AaaRonne, Abynidye, and Aybische. See? Easy peasy squeezy.

**Occassionaly massive waves of creative inspiration will overcome an LDS father as he blesses his infant, and the child will end up with something like this forever attached to his church records: Mahonri James Mori Philip Anc Bob Umer Smith.

This definition must be followed by supporting evidence.

“Nourish and Strengthen Our Bodies”

Something that must be said in any blessing on the food. If a plea is not registered specifically for our food to “nourish and strengthen our bodies,” pathogens immediately leap into action, rendering the LDS grub inedible. (Which is probably what happened with The Pie incident.) You can earn bonus points by blessing the hands that prepared the food. This is awesome for the food preparer, because no matter what tragic accident befalls them, at least their hands will survive.

Double bonus points for “nourish and strengthen our bodies and do us the good that we need.” Which, apparently, was the 1970s Mormon version of “God is great, God is good, Let us thank him for our food. Amen. [Let's just all let out a primal scream directed at the person who implied “good” rhymes with “food.”] I submit exhibit #1:

We don't have them.
*snort*

In this vein I would like to add a submission for Volume 2.

When we took all meetings spread throughout the week and combined them into one 3-hour block on Sunday to preserve family time.
*snort*

My only disappointment with Mormons Say and Do the Darndest Things (outside of the missing cottage cheese, for the love of all that is holy) was that (here comes the feminist rant!) while Miller carefully defined deacon, teacher, and priest, she neglected to define Beehive, Miamaid, and Laurel! I could not have been more excited to see anyone try to explain “Miamaid” than I was in this instance. Therefore, I will have to link this review to Ms. Miller (Sister Miller?) and demand an errata sheet that includes the neglected females. For the sake of equality and all.

You should buy this book, give many gifts, and flood social media with high praise. The book is good and the author is as well.