The Gospel of Inclusivity and Nothingness

Last week I engaged in a libertarian-esque discussion about geopolitical borders. In the midst of it, I came across a post by Kristine A titled The Rexburg Response to #PantsToChurch that rather fit into the concept of the necessity for distinction of groups. 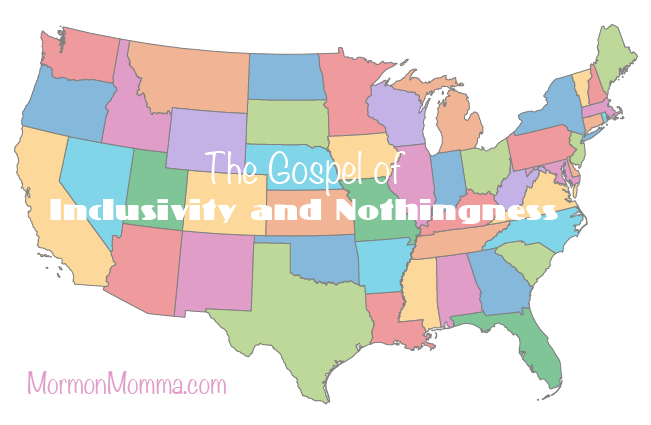 To be clear, I don't care much at all what people wear to church (or anywhere else). I also quite agree with Kristine's final thought:

I don’t want wearing pants to church to be a statement, I want it to just be a reasonable option when I’m choosing a “Sunday Best” outfit to wear on Sabbath morning. In fact I often feel more dressy, comfortable, and modest in my pants. I also feel like I’m helping others know there’s not just one way to be a Mormon woman.

Even though I've never worn pants to church—and don't intend to push the practice by doing so—I think a move in that direction (and to abolish white shirts!) would be beneficial. It's not the pants bit that seems problematic. Rather, it is the constant drumbeat for “inclusion” and “tolerance” that is nonsensical to me. In the preceding paragraph, she wrote:

I've never once have seen a person’s faith shaken by someone wearing pants or by an LGBT person participating in a congregation. Yet our inability to create and maintain an inclusive faith community, despite Elder Uchtdorf’s best efforts, cause nonmembers not to join and cause current members to leave the flock. Isn’t it about time to admit the biggest stumbling block to people’s participation in our faith is our lack of inclusivity (ahem, #lgbtpolicy)?

For this post I won't address the assertion about what might shake one's faith. My focus is on the implication that Uchtdorf (or anyone in church leadership) is (are) making a solidified effort to “maintain an inclusive faith community.” Is this the general perception? I don't think he (they) are doing so or ever will.

The very word member is the key here. A member is a part, element, component of something. Thus there is a defined something these members belong to. And the very definition of that something will always be exclusionary—or it will be meaningless.

I once argued that it's stupid to claim that the priesthood should be gender exclusive because that exclusion makes it more special to men. (While I know that keeping women out does make it more special to some men, the kind of men who get their motivation from the exclusion are probably not the best men to be given that privilege. Hence, dumb.) I still hold that to be true, but that does not mean I am advocating for an inclusive priesthood. I'm advocating for a priesthood of all worthy members without gender discrimination, because I believe God is both Heavenly Father and Heavenly Mother—thus both having the power of God. (This is confirmed in the temple ceremony.) But there is still a worthiness exclusion and I see that as not only meaningful, but wise and important.

The church—like any group—has particular rules of engagement. Belonging is defined by what the members believe and do, not just by what they want to claim membership in. I want to be an elite athlete, a respected scriptorian, and a Broadway star. To date, no one has granted me membership in any of those groups. Hateful bigots.

In most cases, the church is inclusive in the sense that anyone can be a member in good standing if they follow the rules in place. But it's not all inclusive and it makes no sense to make that demand.

Why would we need any church to achieve that inclusive end? Why not just form The Group of the Living Human Race and say, “Hey, all breathing homo sapiens, you belong!” Mission accomplished.

Then people hate on you for excluding dead folks, so you get rid of the breathing requirement.

Then people call you bigoted for excluding aliens, so the human race thing is removed.

Then members of PETA (members???) start blogging about how you are excluding animals and some other warriors of justice castigate you for excluding vegetables and inanimate objects, adding how hateful and awful you are. So that requirement is out, too.

Now you have The Collective of All Things Everywhere. No practice. No policy. No dogma. No doctrine. Only inclusivity and tolerance and love! Characteristics which are, sadly, all exclusive.