Three Moves Are as Good as a Fire 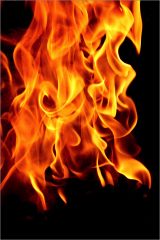 Moving your residence is one of the biggest projects you'll ever undertake. This is amplified exponentially when you have children and/or a home business (or two…or three). And when you have a huge home, it's worse. Even if you are organized, all the extra space makes it easy to justify keeping all sorts of unneeded stuff, because it never gets in your way.

Last month, when we finally decided to make the leap — to stop leasing back our home from the new buyer and to move closer to the build site — we were in for a shock. Since we married in 1985, Sam and I had moved nine times. But this last move was the worst of our lives.

A few months after moving into our custom home in 2003, we had our last baby. And then we also moved our entire company to an 1,800 square foot office above the garage. Sam founded another company while we were there and I still had my business from back in the day. So the move not only included more people, it included more businesses and all their many accumulated accoutrements.

As we began going through every inch of office and storage and drawer and closet space, we began to purge. Things we had been saving became a real burden when we had to pack them and move them. And since the rental home was “only” 5,400 square feet, the even bigger burden was storing all that stuff.

One day Sam declared that he was going to rent a dumpster. I balked. What a waste of time and money that would be! But when this enormous dumpster was three-quarters full within less than two days, I shut my mouth. And I was aghast at all the non-essentials we had stockpiled.

As more and more stuff piled up in the dumpster, I became more and more relieved. I recognized for the first time what an emotional and psychological burden non-essentials can be. I also began to appreciate the idea of simplifying — even if my scale is a little different compared to many.

Still, it was definitely the move from hell. We did it ourselves (with a handful of friends helping with the heaviest stuff) and it took forever. It was hot and miserable and the number of truckloads was unbelievable. And the number of trips was intolerable. And cleaning the bear of a house from top to bottom was onerous. But it's finally over.

A friend once told me that “three moves are as good as a fire.” This single move certainly put us well onto that road—but without the smokey smell.