Cheerleaders and Other Moral Outrage

Yesterday a friend posted to Facebook so repulsed by the NFL that he was threatening to boycott football forever. Hey, I've got football problems of my own. I get it. Here's how my friend reached the tipping point. 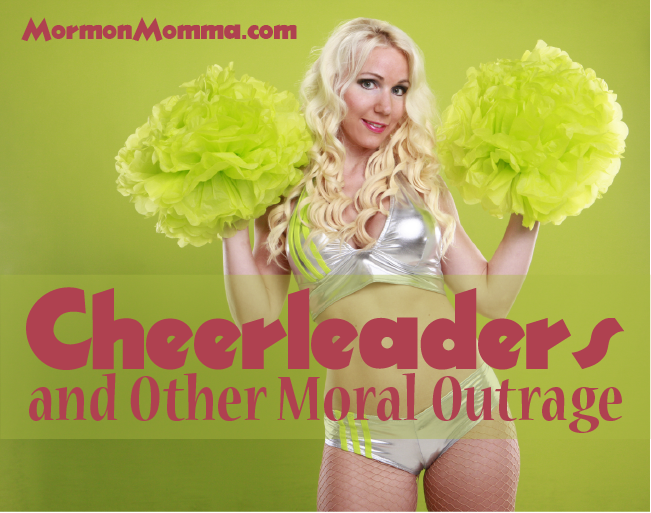 Last February, pro football player Ray Rice (for those of you living under the bleachers) whacked his “fiancée” in an elevator, watched her pass out and collapse, dragged her out of the elevator, kicked her about a bit, forced her to sit up while she regained consciousness, and then milled about with his buddies to make sure any and all witnesses were carefully paid off.

Cracking down on domestic abuse (as the NFL is wont to do), the Ravens suspended the abuser for…two…games. (That'll show him!)

In order to protect herself and all other women from creeps like Rice, Janay Palmer married the dude, refused to press charges, and got all pissy about the media coverage. (Double show him!)

This Ray Rice incident bugged my friend. A lot. So much that he was already “on the verge” of giving up on the NFL all together back then. But he set aside his differences with the league and carried on.

But this week there was another revelation that was just too much to ignore, an act so discombobulating that it (may) put him over the edge for good! In his own words:

This might just be the final straw. Sick. Disgusting. Shameful. Unpardonable.

What was the most egregious sin of the NFL? Dissing the cheer squad.

With the above statement he posted a link to a New York Times article outlining the unforgivable sin:: “Buffalo Bills Cheerleaders' Fight for Wages and Respect.” The internal cognitive dissonance in the title alone caused uncontrollable fits of giggling from my side of the universe. First, because everyone (presumably even the cheerleaders? uh…) knows that being an NFL cheerleader is a (mostly) volunteer position. Second, because  pro “cheerleaders” and “respect” should grammatically be disallowed in the same sentence.

In other words, if looking for either wages or respect, who auditions to be a volunteer exotic dancer?

Oh, my goodness, my goodness! Oh, please, please let me strip and shake and wiggle for you! Plus pom poms! Cuchi-cuchi!

And then I demand you pay me a “living wage” and the respect…I…deserve!

Hey, I'm a libertarian feminist. If you want to volunteer to shake it, shake it, baby, for next to nothing in front of millions, you have my permission! Go for it! But you can't demand respect for being stupid enough to objectify yourself without even reading the contract.

P.S. I anticipate that someone will bring up all the lawsuits from NFL players with long-term health problems associated with their years playing the game and wonder if that bothers me. So I'll preempt the discussion by answering now.

To the extent that NFL coaches, staff, and doctors lied to players and misrepresented medical evidence they had — in order to keep people playing in dangerous situations — yes, I hold them accountable.

To the extent that players pretend they had no clue that having a slew of 300+ pound lineman smash into someone from opposing sides — four hours a day, many hours a month, multiple months per year — repeatedly “ringing your bell,” could possibly have a long-term impact (no pun intended) on how well the brain can function as an actual brain (as opposed to a punching bag in your head)…um…not so much.

Freedom has a price. It allows you to choose to do stupid stuff. Like playing games where the other team's life mission is to pound your face into the dirt. And volunteer to get naked and jiggle in a stadium.

This is why we can't have nice things (like freedom). This is why Michelle Obama dictates what goes in a school lunch and why Michael Bloomberg tries to measure our sodas. Because people are too stupid to read their own contracts and/or understand the basic physics of being systematically pummeled…and want other people to pay for it.