Paid Menopause Leave – Because I Deserve It

Recently I've seen flurry of sharing of a Valerie Jarrett promoted piece of foolishness. Propagandize government enforced perks and progressives clamor to get on board. Publicize perks for doing nothing—with eeeeeevilllll businesses footing the bill—and they will practically hyperventilate. 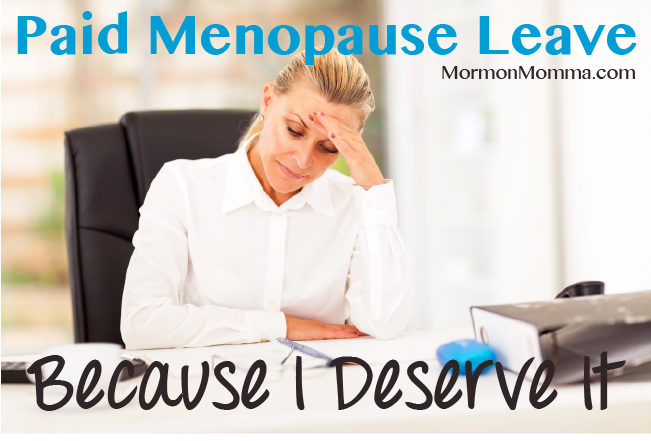 According to the fallacious video “The United States is the ONLY developed nation WITHOUT paid maternity leave.” Compare that American wasteland to the lustrous and caring Germany—where new mommies get 14 weeks off with full pay— and it's apparent that we have it bad here in the suckland of the world.

First, let's be clear that there is tons of maternity leave (including paid leave) in the U.S. of A. It's just not mandated by the government. You aren't “entitled” to it (yet) just because you have the ability and wherewithal to conceive a child.

Second, in the U.S. both business owners and employees have (some measure of) freedom. If you want a job that provides 14 weeks of paid maternity leave (read that: 14 weeks that the company has to pay you for not working, just because you want something for nothing—because womb), here are your options:

But It Doesn't Help Actual Women

Just for fun, we're going to take a mental journey into the land of the wicked business owner who is too greedy and selfish (by definition) to care about humans. (Yes, I know you would never want to actually own a business because business owners are awful people who know nothing but their own appetites and only the poor, beleaguered employees have a grip on the good and the right, but stick with me for a minute…)

Given these choices, whom do you want to hire?

Back in the Florida public university system, there was an unwritten rule:

If you aren't sure you will hire the woman/minority you are considering, do not put her/him on the short list.

Why? Because if a woman or minority got on the short list but did not end up being hired, the chances for a lawsuit rose exponentially. The mandates and special classes and affirmative actions often hurt the very people they were intended to help. (I'm using the word “intended” loosely here, as I don't necessarily think those promoting anti-discrimination exceptions are really motivated by helping the disenfranchised huddled masses.)

Once again, women are making themselves a “special class” who need accommodation for their anatomies and reproductive capabilities. We want equality and we want speciality. Both. Now.

[P.S. We have six kids. When I had them, I chose to stay home with them, even though I had just finished college and Sam was still in graduate school. (Read that: dirt poor.) No one paid me to stay home. I accepted both the rights and the responsibilities of being a stay-at-home parent.]

My “baby” is 11. I'm out of the child-bearing phase. But that should not be cause for discrimination! I want my leave, too!

All I'm asking is that progressives and other fairness advocates pay me for taking time off for the rest of my life for Menopause Leave. I mean, just look at what menopausal women often have to deal with (cue sad music and soft lights):

For the love of all that is holy, who needs paid leave more?! These thirty-something hipsters who are working on their 1.9 children or me?