A social media conversation today started with this:

Is there a meme for Men Explain Mormon Doctrine? If not I propose that should be a thing—the tendency for, whenever a woman expresses concerns with some part of Mormon doctrine and culture, some dude to rush in to reassure her that it's all okay and and then proceed to lay out his entire vision of Mormon Doctrine as though she'd somehow never heard any of it before. 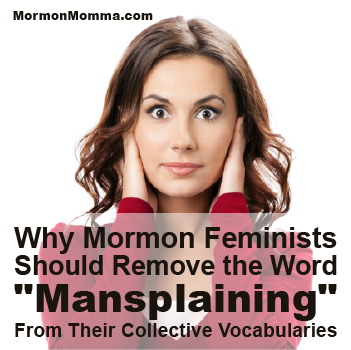 Predictably, it took just a few minutes for someone to use the word mansplaining to label this phenomenon. And then the revelrous sniggering began. Because, you know, never let a serious male mocking opportunity go to waste.

The term has popped up in hundreds of LDS discussions—mostly surrounding gender issues—the past couple of years. It's garnered more overexposure than Hillary Clinton. For those of you who have been spared inundation with the vacuous descriptor, you may have reamined blissfully unaware of this critical conversational term. For you, here is the definition:

To explain something to someone, typically a man to woman, in a manner regarded as condescending or patronizing

Mansplaining is always a pejorative and almost always problematic. (To be clear, I can't think of a single time it was not, I'm just giving the benefit of the doubt to those so fond of using it.) The word is used to:

In other words, throwing the “mansplaining” card is straight up ad hominem. It's the same ad hominem that infuriates feminists (myself included) when our ideas and positions are dismissed—because we are women—rather than being discussed on their merits.

This type of rhetoric doesn't help the feminist cause. Rather, it makes women look like they don't have a point and couldn't defend it logically if they did.

[For the record, Mormon feminists and progressives use the same tactic to refute (using the term loosely) traditional positions taken by highly orthodox women as well, but they tend to use different pejoratives (like “TBM”).]

I personally know men who are far more feminist than I am, who are extremely careful in their verbiage, and who listen intently to and incorporate opinions of women at all times and in all things and in all places. These same men are often castigated for making brief, cogent points that only slightly vary from the female poster's (sometimes unstated) position. (To be clear, while Sam is very egalitarian, he doesn't engage in social media debates, ever, so I'm not talking about him.) It is done so often that the same men have simply left the building. Often the only men left in the discussion are either those who have excessive free time on their hands (due to being unemployable) or those who bow down worshipfully at the utterance of all words that meander from female lips.

We learn nothing and we teach nothing, because we're ranting in an echo chamber.

I objected (on the thread quoted above) to the idea of a mocking meme, noted that it was ad hominem, and suggested that reasonable discussion works better than name calling to actually prove a point. The response?

Because that, my friends, is the way we come to consensus, understanding, and—most of all—equality.

[Addendum: the moderator of the social media group just contacted me saying that I had violated the group terms and added, “Please remove all [group name] comments from your recent blog post within 24 hours. If you choose to leave them up, you will be removed from the group.”

The lengthy group terms state that no personal information can be shared. Neither did I use use the social media site name, the group name, nor the names of the individuals quoted. I attempted to ensure that nothing in my own post, comments, or even the in quotes themselves was personally identifiable by anyone who didn't already have access to the quotes. I think I succeeded. (If not, leave a note in the comments. I'll be happy to amend.)

The group policy statement says, “If you violate any of the rules outlined in this community policy, you will receive a warning via private message from an admin. If you don’t respond to the private message within 72 hours of it being sent and/or if you repeat the infraction, you will be removed from the group immediately.”

This was my first warning and I have not repeated any perceived violation. I find the requirement of removing non-identifiable information unreasonable. Therefore, I have voluntarily left the group and they are free to go on their merry ways without being challenged by people who think labeling things “mansplaining” is nonsensical ad hominem. Woot!]