Lying For a Good Cause 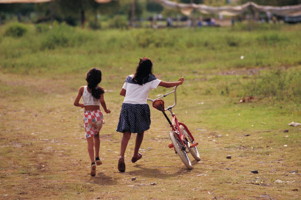 In his transformational book Believing Christ, Stephen Robinson uses the “Parable of the Bicycle” to represent how the atonement works in our lives.

The parable is a touching story about Robinson's young daughter trying, unsuccessful, to save enough money for a bicycle. She saves what she can manage — which isn't much — and her dad makes up the rest, so she can get her dream bike.

Years ago, a friend told me that her husband related that story to numerous investigators while serving his mission. And he told it as if it were his own, true experience.

I was blown away and asked her husband if he really thought lying to investigators was a grand idea. (We were good enough friends that I could do this without an inordinate amount of offense.) His response?

“It always made people cry!”

As if, I suppose, making people cry, having them somehow equate that with “feeling the spirit,” and getting into an emotional foofaraw — and apparently agreeing to be baptized because if it — was a justification for making stuff up.

If you'd read here much, you know that I don't artificially put honesty at the top of the moral food chain. (I don't think any reasonable person does, even though lots of people claim they do and/or think they do.) But I certainly question the efficacy of lying to get converts — when trust is such a central issue.

What do you think?