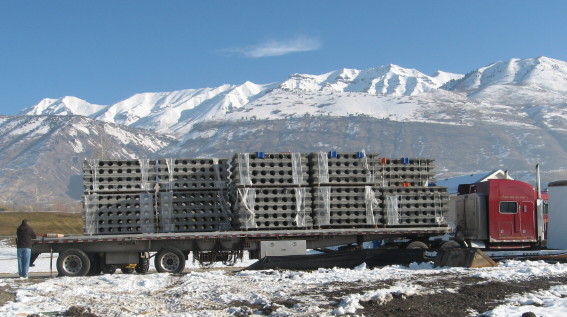 Last week we finally got the call from the Aaron Eames, the concrete panel man. The panels were done. There would be coming on Thursday or Friday! Aaron would begin to build the walls on Friday and then train Brad when he got back in town on Monday. Woot!

The panels were loaded on Thursday and two hours after the driver left St. George he turned back because the panels were shifting.

First shipment of panels reloaded Friday. They finally arrived Saturday. Sam spent a number of hours helping with the offload at the site.

Recent reports say that Eames assistant was nowhere to be found so reload did not occur as scheduled. It is our current understanding that reload was to happen this morning with the truck arriving Tuesday.

If it snows tomorrow — just don't get me started.