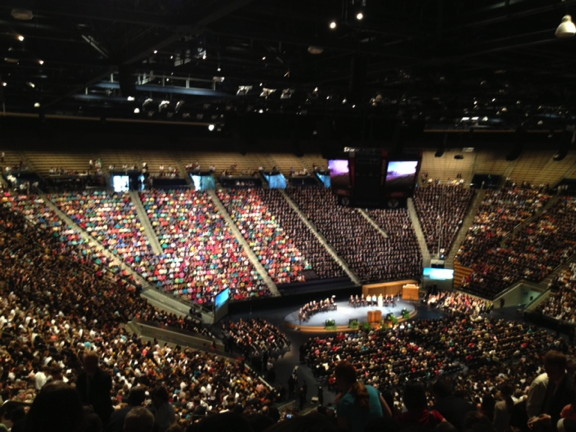 This afternoon my daughter, Alana, and I attended the Hastening the Work of Salvation leadership meeting in the Marriott Center on BYU campus in Provo. While I don't have time to go into detail, I found the meeting very touching. I just wanted to point out some of the changes underway in missionary work and open the topic for discussion.

Today in many parts of the world, missionaries can spend fruitless hours knocking on doors where no one is home. And if they are, they aren't often likely to let completely strangers into their homes. Missionaries will now spend much of the day time confirming appointments, responding to queries on Mormon.org, and using technology (including email, blogs, and social media (Facebook was specifically mentioned) as a means to spread the gospel.

Rather than remaining locked most of the day, churches will be opened for tours, to answer questions, and to teach about the gospel.

Enormous effort will be put into truly making “every member a missionary.” Members, leaders, and missionaries will work together to spread the good news of the gospel. As members, our goal will be to “make sure missionaries are too busy to knock on doors” (if my memory serves).

I also think it's worth mentioning that Elder Holland specifically said that before these changes occurred — and before the missionary age changes occurred last October (contrary to what some deduced) — not only were the Quorum of the 12 and the 70s involved, but the female auxiliary presidencies were also consulted and gave input on the decisions. He went further to say that he hoped all ward councils would work in a similar manner.

What do you think? How will this impact you? I'm excited to see these changes and think they will benefit missionary efforts worldwide.