It's Not About That Bass

This isn't the post I intended to write this weekend. But something happened that pushed it forward. 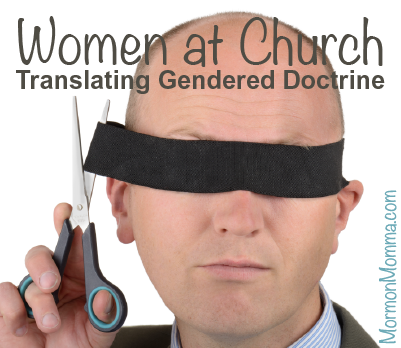 The discussion on my recent post Mother: Where Art Thou? took an interesting, but familiar, turn. I intended the post to be mostly a personal expression of how I hoped for more knowledge about my Heavenly Mother and to support Julie de Azevedo Hanks's music reflecting that goal. But (predictably, I suppose) it has become mostly a discussion of whether and why learning about Her matters at all.

Kind of like, oh, the filthy school of the prophets. That presumptive, treacherous Emma, who had to get all up in Joseph's face about it. As if he didn't have that whole Word of Wisdom thing already worked out in the Lord's proper time.

Reader Jim Cobabe felt compelled to call interest in learning more of Mother in Heaven “feminist propaganda” that, apparently, no one gave a rat's backside about until free love, the Beatles, and marijuana replaced patriarchal common sense. He also claimed the implicit Mother in Heaven is so obvious each time Father in Heaven is stated, that explicitly including her is an exercise in silly duplication.

As of this writing, he hasn't reported how his public church prayer explicitly inserting (the already obviously implied) “Dear Father and Mother in Heaven…” worked out. (I'm not holding my breath.) I suspect it wouldn't be well received in even the most progressive wards because, in fact, “Mother in Heaven” is no more an accepted and understood addendum to “Father in Heaven” than “women” are included in every scriptural or policy notation of “men.” (The latter a fact that Cobabe will defend to his dying breath.)

It's All About That Book

Last December I began reading Neylan McBaine's epic book, Women at Church: Magnifying LDS Women's Local Impact. It was one of those events when you immediately begin smacking the table (or the desk or the treadmill or whatever surface is at hand) repeatedly, audibly declaring, “Yes! Yes!”

It was much like (hang onto your hats, liberals, the true tea party conservative is coming out again) the early 90s (before the internet took itself seriously) when I first heard Rush Limbaugh on the radio. I had spent my entire adult life hearing news from a liberally skewed media and sincerely thought I was the only one who didn't buy the spin. But with every few sentences out of Rush's mouth I slapped the dashboard. “Yes!” For the first time I heard someone far removed from me with whom I generally politically agreed.

McBaine gave voice to my long-held thoughts, ideas, and questions about church governance and policy and did it in the most faithful, respectful way I have ever seen.

From the first page, I was madly highlighting passages on my iPad. It was the kind of highlighting that 8-year-olds do on their first set of scriptures, where so many passages are highlighted that it becomes nearly meaningless. From about chapter two (“A Brief History of the Conversation about Women”), I knew I wanted to write a series of posts discussing particular portions in depth. (And I had no idea until page 155 that she quoted me a couple of times, but I'm honored.)

So here is the first installment.

To be clear, I do not intend this series to be a male-bashing free-for-all (or male bashing at all). I love men and, generally, get along with them better than women. I love analysis and debate and thought and I get annoyed (a feeling, I know) when feelings get in the way of finding truth and solutions. Most men are OK with that and lots of women take it personally and get angry about it. (Sorry, but the stereotypes are true, in my experience.) I have no qualms about countering feminist rhetoric when I think it's wrong.

The truth is, however, those who aren't impacted by a situation often don't see it very clearly. Honorable men and women should be willing to have a candid discussion—with an open mind and heart—about the experiences of others.

In light of the incredulity about needing more light and knowledge about our Heavenly Mother, I submit to you this passage from the book. I cannot count the number of times I have heard similar, unintended acknowledgments from men.

The most gratifying thing in McBaine's conversation was that the man actually recognized the problem all on his own. In my own experience, this has never occurred and when the problem has been pointed out, it has never been thoughtfully received in a church setting.

Read about this situation and see if it looks familiar:

Next time you find your mind wandering at church, read the scriptures replacing all male references to female ones. Can you imagine the Book of Mormon with a Nephia and Moronia? Imagine what it might feel like to see all women on the stand instead of all men. Imagine reading only the words of women in our Relief Society and priesthood manuals. While discussing women of the Bible at work recently, a good-hearted male colleague happened to mention that he hadn’t really paid much attention to any of the women in the Bible because he couldn’t relate to them. The moment he said this, his hand flew to his shocked mouth and he apologized profusely to me. We had a good laugh about his response because it was such a textbook moment of realization for him: women are constantly engaged in a process of likening male role models unto themselves, while men rarely have to go through the same process of disassociating their own gender to find inspiration in female characters.

He doesn't really relate to women. Similar to the “Oh, look, it's the (one of two) obligatory female conference talk(s). Time for a bathroom break!”

Women in the LDS church are acculturated to:

Men almost never have to do this. The package is delivered directly to them in their language, no translation or excepting needed.

Hello, My Name Is Alison and I'm a Sexist

The startling thing to me is that when I replace men with women—much as when I replace Heavenly Father with Heavenly Mother—it seems sacrilegious. As much as I want to hear from women and see women as authorities, my reflexive response is that putting women in those positions seems wrong and bad. Or at least I feel as if I have to keep it a secret because I'll get in trouble if anyone finds out.

Last week I substituted in Gospel Doctrine and even though I had a couple of great quotes by women, I wasn't sure how they would be received if I used them. I knew it wouldn't seem “normal” to have female quotes stuck in there. (They weren't from the manual. The manuals rarely quote women.) So I chose more typical quotes.

I'm quite certain that if a person takes up the prayer challenge I gave to Cobabe, s/he will be reprimanded. I'm quite certain that if a local YW leader inserted “We are daughters of our Heavenly Mother and Father, who love us, and we love them” into the theme, the same would occur. Is it doctrinally contradictory? No. Is it doctrinally inaccurate? No. But we can't say it out loud just the same.

In Florida, a member of the bishopric not only insisted that women couldn't say opening prayers, but that saying “Young Women and Young Men” was unacceptable. The male organization should always be named first. (Pay attention next time we have a solemn assembly. Unless things are changed, it's about forever and a day before any females are asked to sustain. We come last on the totem pole.)

While these unnecessary but obviously sexist practices exist at every turn in the LDS church, they still seem normal and even correct, simply due to their familiarity. It's hard to break out of that paradigm even though I want to. As I said in “Dealing with Negativity About Temples and Garments“:

Surprisingly, the sexism in both the endowment and sealing ceremony largely escaped me initially. I did notice some differences, but having grown up not only in a sexist society, but in a church that had enormous gender disparity, not only did it not bother me much, but I expected it to be there.

McBaine's book opens the conversation about which differences are divinely inspired and which are cultural artifacts. She helps us see how we can start to make things better.

How do you translate predominantly male doctrine to female practice?