Large institutions move slowly. Sometimes painfully slowly. When your own impressions of the need for change occurred decades before you saw an evidence of movement—and you’re afraid you will literally be dead before what you dream for comes to fruition—it can be excruciatingly painful. 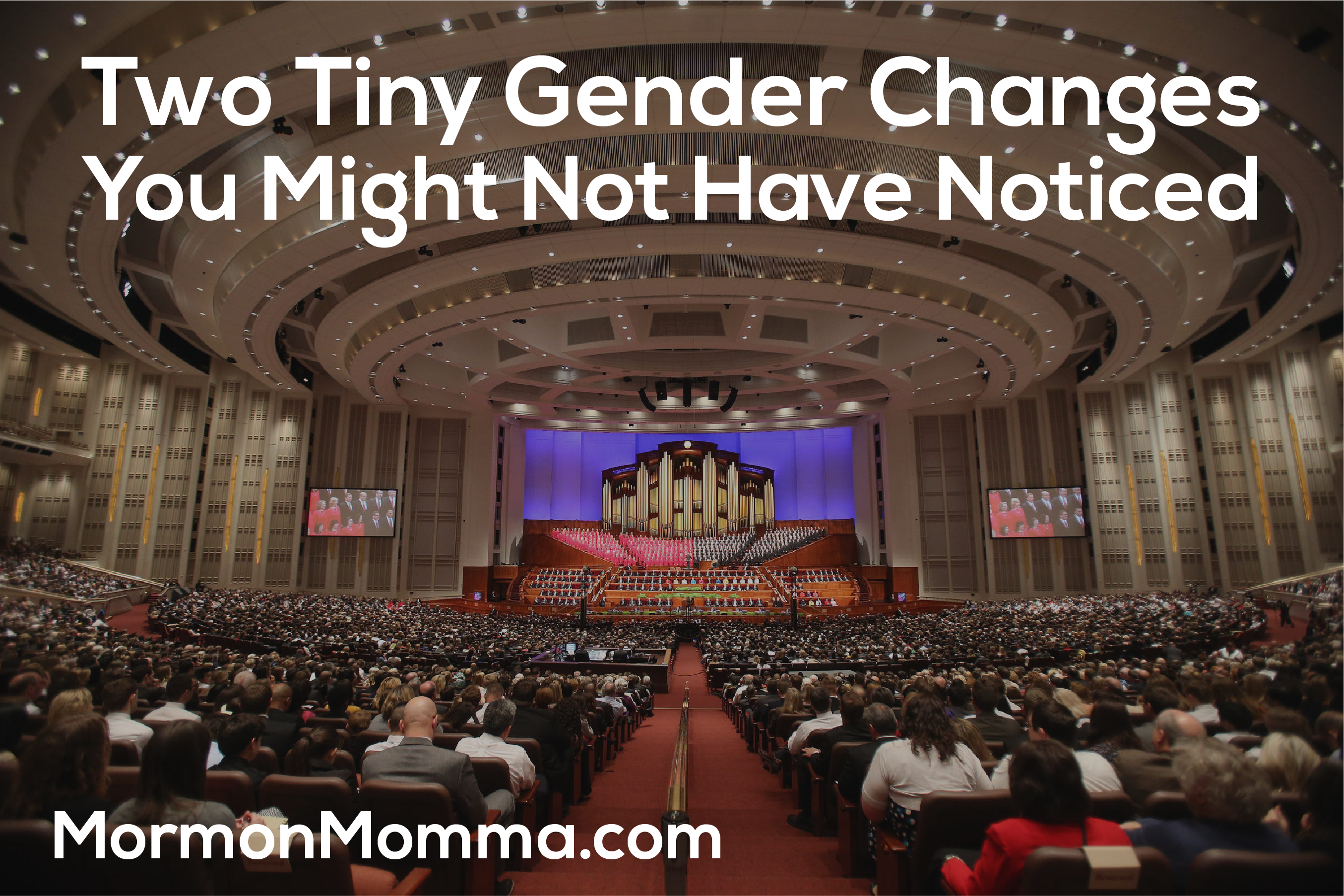 To be clear, I believe our Heavenly Parents both love all of us infinitely. I do not believe they favor men over women, nor do I think they want men to be the sole decision-makers and women to be subordinate followers. I believe they are the quintessential equal partnership and hope for the same for all of us.

But, back to earthly reality, there were two small changes this spring and I think even small positive change is worth noting and celebrating.

More Female Speakers in Conference Than Ever Before

First, I have not done an exhaustive search of every conference session in the history of the modern church. If I’m mistaken, please note it in the comments.

Second, I’m not counting the Relief Society session (which did not occur this time around) nor any of the past addendum meetings for women. I’m not doing so because those meetings are specifically defined by tradition to have a very particular makeup. At this time, the meeting always has three female speakers—chosen from the presidencies of the female-lead auxiliaries—and is always keynoted by a male, chosen from the first presidency. (How I wish the priesthood session included a female speaker, for balance, but I digress.))

With regard to the four general sessions of General Conference, we had three female speakers, which is more than ever before to the best of my recollection. Since women (finally) began speaking in General Conference, there have usually been two (one on Saturday and one on Sunday). April 2017 was the exception, featuring only one (on Sunday morning).

Edit per Emily W. Jensen: Three women spoke in general sessions in April 2002. Good news and bad news. Good that it happened. Bad that it took 16 years to replicate. Let’s hope it’s not another 16 before it happens again. Can’t we take the baby step of having just one woman per session amidst the, oh, 5–9 men speaking? Would that be so hard?

Edit per Tamara Bahr: Four women spoke in the April 1984 conference general sessions. (Of course, that was offset by the October 1984 sessions when exactly zero spoke.) So 18 years before the three spoke. Winner winner chicken dinner. By my calculations that means we should have three (or four) speak again in 2032. Awesome… An additional note both of the 1984 General Women’s Meetings began with a “Coordination and Cooperation” speech.

During the last Solemn Assembly (to sustain President Monson), I sat with my family around the TV. As Dieter F. Uchtdorf went through the process, asking one group after another to stand and sustain the new prophet, first presidency, etc., my 14-year-old daughter, exasperated, finally blurted out, “When are they ever going to ask any of the girls?!”

Indeed, every group in the church, down to the deacons, was asked for a sustaining vote before any women included.

On March 31st, 2018, there was a slight change. After general members who were Melchizedek Priesthood holders were asked to stand and sustain, members of the Relief Society (women ages 18 and up) were called to sustain the prophet. After that, Aaronic Priesthood boys and then Young Women (girls 12-18) were called (in that order) followed by the call for all members without classification.

Yes, I realize men still precede women of similar position in all cases. But this small moment seemed significant to me. Yes, I realize it’s sad that such a thing is significant. But I’ll still gladly accept each step toward real side by side work as it comes.