Sleazevertising:
An Open Letter to the BYU Athletic Department

Note to internet dolts: This letter is not about modesty. (I believe women should be able to dress as they choose and men should grow up and learn to control themselves. You know, like adults.) The letter is about female objectification. If you don't know the difference, educate yourselves before you build your straw men.

To Whom It May Concern:

I'm  a decade late to the misogynist party. 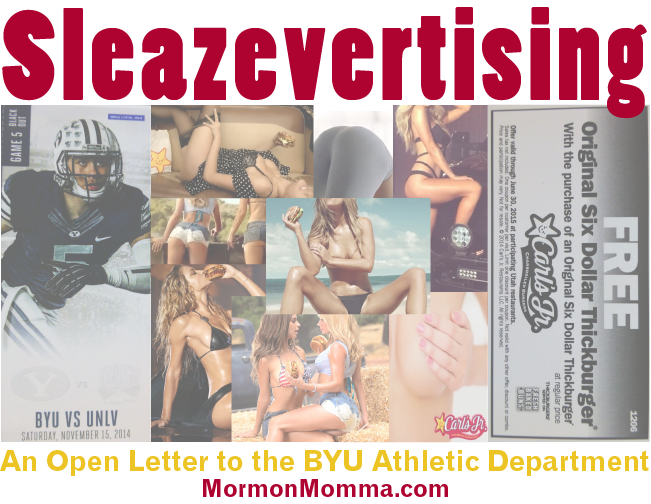 This past month it has (finally) come to my attention that Carl's Jr. has long engaged in highly offensive advertising. According to Andrew Puzzler, the chief executive of Carl's Jr.'s parent company,:

We target hungry guys, and we get young kids that want to be young hungry guys.

In particular, these current and future hungry young men need to see scantily clad (if that), suggestively posed, writhing women — often with men ogling and panting from the sidelines — in order to be induced to buy the products. Which are hamburgers.

This type of advertising reduces women to mere slabs of flesh to be consumed by men and to be used as they see fit for personal enjoyment. It does not empower women nor treat them with basic human dignity and respect. It certainly does not conform to the standards of the church.

Apparently my family's television selections aren't in the Carl's Jr.'s target audience demographic, so this news was surprising to me. It was most surprising because we have patronized this establishment precisely because Carl's Jr. was promoted to us by BYU. As you know, for at least a couple of seasons, BYU football tickets have included Carl's Jr. coupons on the reverse side. And my tickets for the 2015 season are no exception.

Given that BYU is owned by the LDS church and the church's position is that women are children of God, equal in standing to men, the promotion of this company is inappropriate.

As the mother of four daughters, I am concerned about the environment in which they live and hope church-owned institutions will actively refuse association with companies that objectify women.

As a BYU graduate, I ask BYU administrators, promoters, and athletic department personnel to more carefully scrutinize the businesses with which it forms partnerships and from which it accepts advertising dollars to be sure they aren't actively engaged in promoting such a harmful culture.

Thank you for your consideration.

If we hide behind pretty language and genteel photographs — in the name of proper demeanor — when the opposite is being used against us, our sisters and daughters will continue to be pummeled with an onslaught of media and cultural harassment.

Years ago I moved all my domains and hosting away from GoDaddy for it's skanky advertising. This week I've boycotted Carl's Jr. for life.

This is the truth. It has been going on for nearly a decade. I hope you join me in the fight against such harmful corporate culture. Spread the word.

I sent the letter to multiple people at BYU athletics the day I published this post. I have not received a single response from anyone.

A man in a social media group I'm part of wrote the following:

I thought I would let everyone know about my telephone conversation with the Sponsorship Group of BYU Athletics. The person I spoke with said they were comfortable with the Carl's Jr. people they worked with locally and so they weren't overly concerned about the national advertising. I asked him if he thought having Carl's Jr. as a sponsor condoned their sleazy national advertising. He said no. As a long time BYU sports fan I told him that lately the BYU Athletic Department seems to be more concerned about chasing the almighty dollar. He said thanks for your comments and that ended our conversation. I think unless many people (at least 100) contact the Sponsorship Group of the BYU Athletic Department nothing will ever change.

Below is the contact  information for the BYU Corporate Partnership staff. Please let your voice be heard.

My only responses are:

Adweek noticed the pattern. I'm über shocked. You, too?

Carl's Jr.'s Super Bowl Ad Is Here, and What a Surprise, It Stars an Almost-Naked Woman