When I received my endowments a week before my wedding in 1985 I was able to see the different styles and fabrics of the ceremonial robes. I was also able to try on all the various garment styles, as they had unmarked garments available. 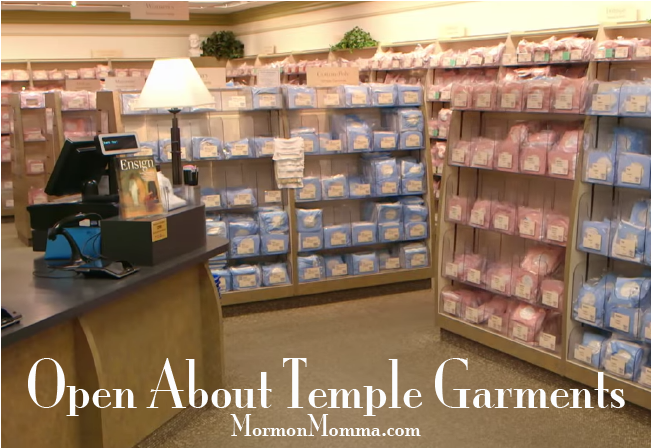 By the time one of my daughters was married in 2011, this practice had stopped for some reason. Instead, selecting garments was a very expensive hit and miss prospect and was a frustrating situation for both of us.

In early 2013, another daughter was preparing to receive her endowments. We went to LDS Church Distribution located in the Deseret Book in south Orem. We stood in line to go to the private room to select her ceremonial temple clothing. Once it was our turn, the attendant asked her which style of veil she wanted. She asked what her options were. The woman began to describe the choices. I suggested that she take out a sample of each and just show them to my daughter so she could see the differences. The attendant informed me that since my daughter had not been endowed, she could not see the robes. She told my daughter to turn her back to us so that I could see them and describe them to her.

I noted that the robes are openly on display on the body of the decedent in every LDS funeral that has an open casket with an endowed member, but I was unable to change her position. Another odd moment in ceremonial clothing.

Let's face it, when your religious vestment is underwear, it's awkward. It paints a giant target on members for everyone from 5-year-olds through junior high bullies and up to adults who have no sense of decorum to aim at. (Which these days includes most of society.) So the constant ridicule about our “magic underwear” got old when I was prepubescent.

This week the church came out with an article and a video about LDS garments. The article is on the newsroom site and the video is on YouTube.

[Note: This is an updated video. The original was edited to remove some images that included someone who had been convicted of a crime.]

I admit I was more than a little surprised. Not that you can't find garments plastered all over the internet with a simple search (I actually didn't know this experientially until just a moment ago when I was searching for the new article because, well, I've never tried to google garments before), but now the church has created a video explaining LDS ceremonial attire including images of both men's and women's garments and men's ceremonial robes. (The women's are only different in that we wear a veil instead of a cap.)

I'm not sure if the presenters planned the thumbnail of the video to be a long shot of men's garments laid out on a table, but there they are in all their glory!

Some people incorrectly refer to temple garments as ‘magical' or ‘magic underwear.' These words are not only inaccurate, but also offensive to members of The Church of Jesus Christ of Latter-day Saints.

In all my years, I can't recall a single use of this verbiage that was more than in-your-face mocking. So whether or not we've just learned to ignore it, in my estimation it's always intended to be offensive. So, yes, grow up people. Get over it.

On the other hand, I think we have perpetuated the notion, given the myriad tales told of people being protected by their garments, etc. If it were true in a general sense that garments offered physical protection, I think we should wear them on our heads, rather than over our thighs and shoulders! So while we ask others to be respectful of our underwear (in a world where no one anywhere is respectful of anyone's underwear), let's stop talking so much about it's magical properties, too.

My only complaints about the presentation are small.

This presentation is much needed to give some context to what endowed members wear in the temple and every day, given that it's no longer remotely private. Sometimes the best defense is a good offense and I suspect that an open presentation directly from the church is a better approach than pretending no one knows about it because no one would be so crass as to discuss someone else's underwear, right?

I suspect the conversation about religious underwear will continue to be awkward. But it is a step in the right direction.

What did you think about the new presentation about ritual temple clothing?