Alison Moore Smith on November 18, 2009
in Design Your Own House, for Home 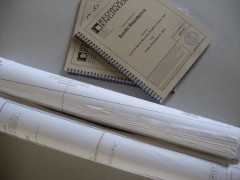 We were just informed that the new, re-engineered, super-improved blueprints are done and ready to pick up. We’re finally back to where we were last June before the great awakening.

It’s exciting. It’s a relief. But every time someone asks, “How is the house going?” (which occurs approximately every 27 minutes around the clock) and I tell them we just need to get the permits, I am met with sighs, moans, and/or suppressed laughter. Sometimes I even get eye-rolling and, “Oh, so you’ll start in a few months?”

Not the reaction I was hoping for.

Truth be told, we submitted the last set of plans on June 29. A week later, we got a call asking if we were running a daycare. (Apparently having a workshop and a homeschool room are highly suspect.) I told the guy we were not. That’s the last we heard from anyone. Since we knew we needed a redesign, there was no point in pestering them, but I did begin to wonder if it really took over four months to approve plans.

Still, it’s another step closer. And with winter looming, we can’t move quickly enough. Next step, resubmission to the city.