This morning I intended to write a post about the church’s press conference Tuesday, variously hailed and/or jeered as calling for religious liberty, supporting LGBT rights, elevating institutional rights while denigrating individual liberties, making a press conference out of a molehill, “punking” the press with bloviation, etc. 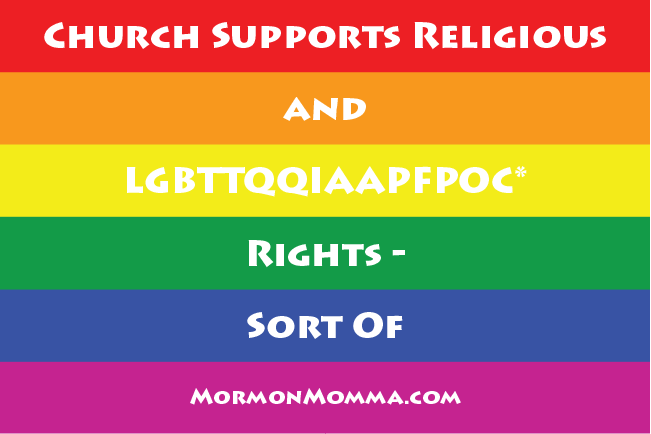 As it turns out, however, much of what I intended to say has already been addressed by Connor Boyack (president of Libertas Institute), in Supporting Property Rights Means Opposing Anti-Discrimination Law. Please take the time to read this.

To be clear, I have opposed anti-discrimination legislation for decades (in the cases of individuals and private businesses, not government entities). I have done so on principle and long before gay rights was on my (or the general) radar.

I oppose these things legislatively, but not necessarily morally. I would like people to want to hire Mormons. I hope I won’t be excluded simply because I’m a woman. But I accept that the price of freedom is that other people have the right to do with their businesses and properties what they choose in spite of my preferences.

The church isn’t changing policy with regard to homosexuality, but “are suggesting a way forward in which those with different views on these complex issues can together seek solutions that will be fair to everyone.”

My problem is that I don’t think their “way forward” is logical.

Here are some thoughts on the particulars of the press conference, introduced by D. Todd Christofferson (Quorum of the Twelve Apostles). Please add your own in the comments.

On one side of the debate we have advocates of LGBT rights. This movement arose after centuries of ridicule, persecution, and even violence against homosexuals.

When such claims are made, the implication is that these abuses were created by dolts living under rocks—dolts the church unequivocally disavows. But the persecution of which she speaks seems to have arisen from the fairly consistent (and current) teaching in most religious institutions that homosexual behavior is a sin.

Given that position, what does the church advocate with regard to sin? Is the treatment of those who engage in this particular named sin markedly different from other sins?

Ultimately, most of society recognized that such treatment was simply wrong and that such basic human rights as securing a job or a place to live should not depend on a person’s sexual orientation.

Marriott needs to brush up on her constitutional studies. Neither job security nor housing is a right. (And if this has changed, please tell my college kids! I’m sure they will be relieved to know that they are owed jobs and houses, no matter what!)

Should securing a job or a place to live depend on a person’s sexual orientation? That decision is the sole right of the person who owns the business or housing. Not Marriott, not me, not the church, not any other person or group.

Interestingly—and in spite of these statements—when it comes to jobs and housing, the church is a model of pro-discrimination. To be clear, I believe they have every right to do so, but in light of their actual policies, the statement is baffling.

It’s for this reason that the church has publicly favored laws and ordinances that protect LGBT people from discrimination in housing and employment.

As long as the church doesn’t have to follow those same laws.

Oaks outlined some cases where people were singled out and harmed due to their religious beliefs or association. Those who deny that these people were victimized (a common thread the past few days) are nonsensical. Obviously they were discriminated against and many were irreparably harmed.

In light of those facts, here are my questions:

Should it be legal to discriminate over religion?

All people should have the right to choose how they use their resources and association, based on their value sets. (Whether the value set is labelled religious or areligious is irrelevant.)

Is it ethical to discriminate over religion?

The answer to that question would have to be debated on a case by case basis—and views would, of course, vary.

If an outspoken, activist member of Westboro Baptist Church were to apply for a job at my business, I’d kick him to the curb. I should not have to hire, support, or associate with anyone whom I feel is depraved and disgusting (no matter who it is or why I feel as I do).

It is one of today’s great ironies that some people who have fought so hard for LGBT rights, now try to deny the rights of others to disagree with their public policy proposals.

On this point, Oaks is spot on. The so-called move for tolerance is, in fact, a cry for very specific tolerance and extreme intolerance to all other positions. Some are so busy pounding their (agnostic) pulpits, they can’t even stop to read a dictionary.

Exmo Samantha Allen of The Daily Beast wins the 2015 Unhinged Award with this beauty of a dual math and language fail:

Here’s another equation that Mormons should take to heart: Not tolerating intolerance is not the same thing as intolerance itself.

Someone stop her. She’s not helping you.

Oaks reiterates the church’s support for non-discrimination in housing and employment. In context I cannot understand what he means by that unless it is that individuals have no right to determine how to manage their property and businesses, but churches (or other institutions) do. That, sir, is just wrong. Then Oaks gave some articles of faith, if you will, of fairness.

Accommodating the rights of all people—including their religious rights—requires wisdom and judgement, compassion, fairness. Politically it certainly requires dedication to the highest level of statesmanship.

Nothing is achieved if either side resorts to bullying, political point-scoring, or accusations of bigotry.

These are serious issues and they require serious minds engaged in thoughtful, courteous discourse.

We run into a definitional problem, however, when this statement is coupled with Oaks’s principle #4. Is it “persecution” or “bullying” when the church excommunicates members who engage in homosexual relations or speak out about gender disparity? Maybe. Is this kind of “persecution” and “bullying” acceptable? The church thinks it is when it is administered institutionally. While I hold that the church alone has the right to determine church policy, we should acknowledge that enforcing those policies can seem every bit as coercive as, say, boycotting a business with policies we don’t like.

If you believe the LDS church holds authority to perform saving ordinances, as I do, then having those ordinances threatened is a critical issue that might require action on the church’s part—including action that may discriminate. Do individuals not need the same freedom to align their own lives with their personal morals and values?

It is following this statement that Holland goes where I cannot go. He makes a case that the church can hold certain standards and, by extension, anything church owned can hold the same standards. He extends that same right to families (in their own homes, specifically teaching religious values) and to individuals (in choosing professions). But he disallows those same standards for individuals.

Holland seems to forget that it has to be a person who is being required to provide housing and employment to specific “special classes,” when the church won’t provide for those same classes themselves.

In the name of true fairness, I support property owners and business owners using their properties and businesses and other resources as they see fit, without government mandates and interference. For example, I support all the following positions:

Obviously, I think both LGBT activists and church leaders/policy miss the freedom mark. The libertarian-esque position is the only one that seems consistent and logical.

* Lesbian, gay, bisexual, transgender, transsexual, queer, questioning, intersex, asexual, ally, panssexual, fetish, polyamorous, otherkin, cisgender. (I would have added FABGLITTER but it created redundancy—plus I can’t even find what TER means. I’m sure I missed some. I’m sorry. I tried.)

Next post: Emotional Labor – The Injustice of It All