Today Paul Rolly of the Salt Lake Tribune wrote an article on the scuzzball advertising consuming Carl's Jr. He quoted my post from last month, Sleazevertising: An Open Letter to the BYU Athletic Department. 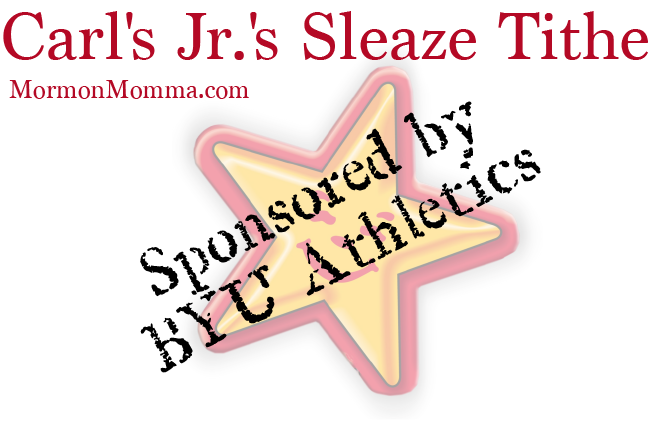 In spite of forwarding the letter to every person I could find at BYU Athletics and the Sponsorship Group, I have heard nothing back from anyone. Rolly tried to contact BYU spokeswoman Carrie Jenkins about the issue but got no response. (I like to imagine that Ms. Jenkins was busy storming over to the Smith Field House to demand changes, but given this is the same woman who thinks BYU students don't want caffeinated beverages, I am not holding my breath.)

Later, however, Rolly did get “this terse email from the communications office:”

BYU Athletics works with local [Carl’s Jr.] franchise owners, who have supported athletics for many years. These owners do not control or provide input on corporate advertising campaigns. Any promotion with BYU Athletics pertains to the local franchises.

In other words, money for nothing and chicks for free.

In other words, every dollar you spend at any Carl's Jr. means more money for skanky, demeaning, objectifying advertising that hurts all women.

Sure, the local Carl's Jr. franchisees are big BYU boosters. Sure they give boatloads of money to the Cougs in exchange for the back-of-the-ticket coupon ads. Heck, they probably even pal around with the Cougar Club big wigs and sit in a loge during games, sipping caffeine free coke and munching on culinary delights those in the lower echelons can only imagine. But does that justify promoting a company that has long felt female objectification is the best way to sell a burger?

At least FSU benched Jameis Winston for demeaning women (thanks to a hefty nudge from the university president). Shame on BYU for looking the other way while women are harmed.

Will Kevin Worthen have the burgers to clean up the slime in BYU Athletics?