Last year I wrote an open letter to BYU athletics about their affiliation with the slimy Carl's Jr. franchise. Later I wrote a followup noting that, all claims to the contrary, some local franchise profits do (of course) get funneled to corporate advertising. 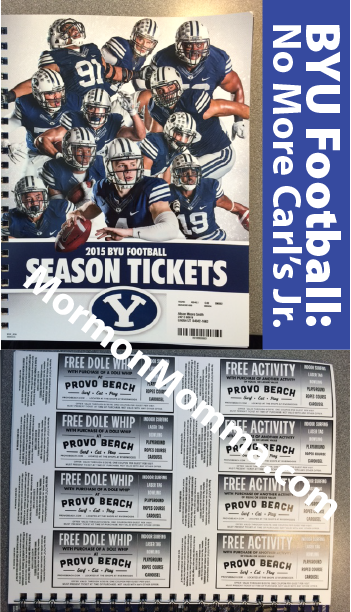 Carl's Jr. doesn't even try to be subtle in its objectification of women and everyone seemed to understand this except the people at BYU collecting the cash. As Keith Berry commented on an AdWeek article about the latest sleazy commercial:

Wouldn't it be better to scrap all the masturbatory innuendo, and just simply have a guy furiously pleasuring himself as she walked by? Sure, it lacks all the subtlety and artistic prowess of a typical Carl's Jr. spot, but a little more on brand, no?

“On brand” is right. And the BYU partnership with such branding created more than a little cognitive dissonance. I sent the letter to every person in both BYU Athletics, the BYU Corporate Partnership Staff, BYU administration—anyone I could get contact information for. I did not receive a single response from anyone, in any capacity, in any department.

Yesterday, however, I received some very good news. The 2015 BYU football seaon tickets do not feature Carl's Jr. and no hint of CJ can be found anywhere in the brochure!