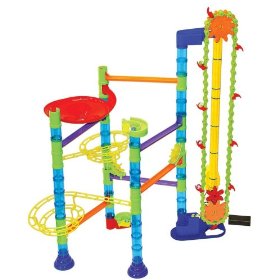 When I was four-years-old, my neighbor friend, Chris Olsen, brought out the coolest thing I’d ever seen. It was a pair of wooden marble runs. You took a marble, put it at the top and watched it run down the little track about two feet, hit the end, turn the corner, and head down the next two feet of track. This repeated about three more times and then you started again.

For some reason, I could have sat there for hours and hours fixated on the little rolling ball. Chris and Brad (his little brother) were apparently not nearly as intellectually inquisitive, as they usually dragged me away to do something boring like trike riding.

With the memory of one of the greatest joys of my childhood firmly entrenched, I looked for a marble track for years. But a simple zig zag track would no longer do. As an informed parent, the set had to be made with strong, durable materials that could stand up to years of play. It had to be made so that is could be put together by a young child and stand up firmly without toppling over. And, of course, it had to be expandable so that other pieces could be added in the future.

We settled on the Quercetti Marble Run and have not been disappointed. It has all sorts of very cool parts. Our favorite is probably the motorized elevator that returns the marbles back to the top. While it is battery operated, it feels to the kids like a perpetual motion machine.

The marble run fits together easily, but stand up firmly, even on moderately deep carpet. And it is endlessly configurable. With a good-sized set, you have so many possible configurations that the kids work on them for hours, trying new things and experimenting.

There are multiple marble runs available and all the pieces work together. So if your children love them like mine, you can add on more pieces for birthdays or holidays.

While I was typing up this article, Caleb, my five-year-old, saw the image and ran in. “Mom! I want another marble run for my birthday! One with a tunnel!” I don’t even know if Quercetti makes a marble run with a tunnel, but you can bet I’ll find out by next October.

Previous post: Neil L. Andersen of the Quorum of the Twelve