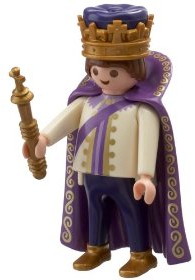 In the early 1990’s—not long after moving to Florida—I was introduced to Playmobil when a friend gathered up her kids and invited me to bring mine to the Playmobil Fun Park in Palm Beach Gardens. For $1.00 each, your kids can spend hours and hours in 20,000 square feet of play area with literally tens of thousands of Playmobil parts and pieces. And we did.

When we were finally done, we discovered that the exit—much like the most popular Disney rides—marked a winding path through the middle of the Playmobil store. While my kids loved the toys, being recent college graduates, I was put off by what I thought were high prices. It wasn’t until over a decade later that—after spending a fortune on junky toys that either readily broke or readily bored the kids—that I revisited the Playmobil idea.

My oldest son had expressed his great interest in a pirate ship to Santa. In looking around at the various choices—and there were dozens in the wake of the huge popularity of Pirates of the Caribbean—we found a lot of very expensive things that, given past experience would probably be fun for a few days and then set aside.

Finally, given our past experience and a few friends who still raved about Playmobil toys, we purchased a giant pirate ship with red sails, a large crew, a parrot, and some treasure. It met what had become our usual criteria: quality, durability, expandability.

The pieces are well made and built for hours of play. Each tiny, posable person comes with multiple of removable, interchangeable custom accessories. Each play set comes with dozens of pieces that can be used in a variety of ways. And, of course there are myriad sets to choose from, with all sorts of working, moving, shooting, rolling, parts.

Since that initial Playmobil purchase, we have added on many times. We now have more pirates who were joined by knights and castles, various rescue personnel, construction workers, airplanes and assorted airport workers, helicopters, adventurers, and farmers. The Romans and circus performers are looking like serious contenders for the next Playmobil phase.

Two thumbs up for Playmobil. It’s one of the few sets that made it onto our must-have toys list.