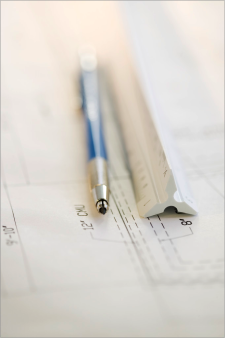 Our new dream house did not come in at a dream cost. And so, as I told you last month, we decided to redesign the house. That's no big deal. We've done it so many times already. And we did it endlessly on the first custom home, too.

It's the time factor that's killing me. We bought the building lot over three years ago. And now with the engineering done, the blueprints wet-stamped, ballpark bids in, and ready to get our hands dirty—we find ourselves back at the drafting table. We should be digging a hole.

In the end, though, it's not so bad. I married a genius. Now that the unknowns are known, now that the constraints are fully recognized, now that we have an idea of where we need to go, getting the work done wasn't nearly as hard as the first, oh, 87 iterations.

We pulled out the bubble diagrams, cut off the top floor, threw the garages into the basement, repositioned the house to almost eliminate berms, and removed a bunch of cement block and steel. After a half-dozen attempts, we have a home that cut out 2,000 square feet, has better flow—and still has all the things we need. And it looks even better outside!

He's getting the electrical onto the plans and we'll post them as soon as possible.

Yes, Sam is a genius. And a magician. Dream home back on track!